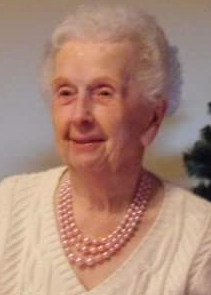 Alberta was born on March 26, 1919, in Livingston, IL. The daughter of Frank & Josephine (Knaus) Fern.  At age 8 she moved to Sheboygan, WI, where she attended school, graduating from Sheboygan Central High School in 1937.

Alberta married Frank Zebre on November 15, 1947, in Sheboygan, WI, at Cyril & Methadius Catholic Church, and they lived in Kemmerer, WY where together they raised their family.  Alberta was a devoted wife, mother, and grandmother.

Alberta was a member of St. Patrick’s Catholic Church, CCW, and a member of the church choir for over sixty years.

She was preceded in death by her husband, Frank; parents, Frank and Josephine Fern, a brother, Frank Fern, Jr.; and infant brother and sister, and her granddaughter, Jaime Griff.

Rosary will be held Friday, June 17, 2016 at 7:00 P.M. At St. Patrick’s Catholic Church and Mass of Christian Burial will be held on Saturday, June 18, 2016 at 11:00 A.M. With Father David Officiating.  Interment will follow services at the South Lincoln Cemetery, Kemmerer, WY.

To order memorial trees or send flowers to the family in memory of Alberta Francis Zebre, please visit our flower store.