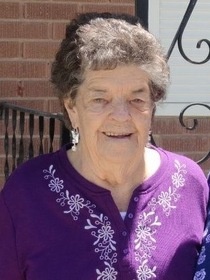 
Alta LaDean Thornock, age 90, passed away at her home on Tuesday, May 5, 2015 of natural causes.  She was born in Tooele, Utah, on December 24, 1924 the daughter of George Sylvester and Lorita (Cardon) Dymock.
She married Merrill Smith Thornock on September 29, 1944 in Elko, Nevada.  She was later sealed in the Salt Lake City LDS Temple to him.  He preceded her in death in July of 1991.
LaDean retired from the U.S. Forest Service, after many years of employment.  She was a long time, active member of the Fraternal Order of Eagles Auxiliary.  She served in many capacities, including State and Tri-State President of the Ladies Auxiliary.  She was well respected in the local community, and selflessly gave her time, volunteering at the hospital gift shop and the Senior Center.  LaDean truly enjoyed her time with friends and family, whether it was spent scrapbooking, weekly breakfast, lunch and dinner dates, or recounting her rich family history. She was a faithful member of the church, practiced the teachings of Christ, and lived to serve Him, as demonstrated in her daily life.  Simply put, to know her, was to love her.
LaDean is survived by her sisters, Lillian Horrocks, Evelyn Lindsey, Donna Hodson, and Nancy Draper, all of Utah.  She is survived by two daughters; Bonnie (Bill) Buckley, of Taylorsville, Utah; and Linda (William) Edwards, of Southlake, Texas; and one daughter-in-law, Lori (Neville) Lowham.  She is also survived by eighteen grandchildren; Toni Wilkins, Carolyn Price, Merrill Buckley, Amy Abplanalp, Matthew Buckley, Elizabeth Visser, Lamont “Monte” Buckley, Traci Frittz, Jennifer Stepp, Marjorie Wilcox, William Edwards IV, Daniel Edwards, Michael Thornock, Jerry Thornock, Bryan Dickison, Ashley Tackitt, Brandi Winters, and Tiffany Bundy; twenty eight great grandchildren; and three great great grandchildren.
She is preceded in death by her husband, Merrill Smith Thornock, two sons; Michael Dean Thornock, and Jerry Lynn Thornock, four sisters, one brother, two granddaughters, and one great granddaughter.
Visitation was held at Ball Family Chapel on Sunday, May 10, 2015 from 6:00 P.M. until 8:00 P.M.  Funeral services were conducted on Monday, May 11, 2015 at 11:00 A.M. at the Kemmerer L.D.S. Stake Center, in Kemmerer, WY, with Bishop Paul Kaiser officiating.  Interment followed at the South Lincoln Cemetery, Kemmerer, WY.
To order memorial trees or send flowers to the family in memory of Alta LaDean Thornock, please visit our flower store.