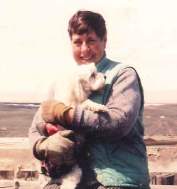 Anne L. Krall Bagley, passed away on February 20, 2016 at South Lincoln Medical Center in Kemmerer, Wyoming, at the age of 94.

She was born on May 31, 1921 in Sublette, WY.; the daughter of Robert and Ludmilla Krall.  She grew up on the family homestead in Fontenelle Basin.

On October 27, 1947 she married Ross Bagley in Kemmerer, WY.  They established their own ranch in Fontenelle Basin and lived there year round for twenty years.

Memorial contributions may be made to the Kemmerer Senior Citizens Center.

Anne is survived by numerous nieces and nephews.

Cremaion has taken place under the care of Ball Family Chapel.  Online condolences may be left at ballfamilychapel.com.

At her request, no services will be held.

To order memorial trees or send flowers to the family in memory of Anne L. Bagley, please visit our flower store.