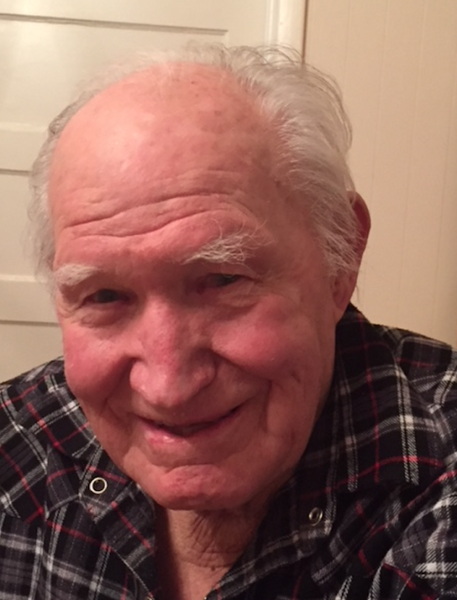 Ray’s story started on July 6, 1926 in Oakley, WY, the oldest of three children, born to Arnold Lancelot and Annice Stonebraker Ball.  At the age of 15 years, his family moved into Kemmerer from Oakley, when the Kemmerer Mine closed.  After graduating from Kemmerer High School in 1944, Ray was drafted into the U.S. Army on December 28, 1944.  He was honorably dishcarged on October 5, 1946.

Ray was sealed for time and all eternity to his high school sweetheart, Shirley Teuscher, on January 5, 1948 in the Salt Lake Temple, Salt Lake City, UT.  Together, they raised three children, Raeleen, Gordon Dee and William Wallace.

Working for the city of Kemmerer, he helped construct the Kemmerer Airport runway and fence before going to work for the U.S. Postal Service.  Ray walked 18 miles every day greeting people and delivering mail door to door for many years.  Serving with dedicated men and enthusiastic youth, scouting became his passion.  In 1950, he was put in as Scout Master for Troop 16 in Kemmerer serving until 1973.  Camp New Fork became his summer home where he worked for 39 years first as the program director and eventually becoming the Camp Director.  After retiring from the post office, he worked as a District Executive for the Jim Bridger Council, BSA for 18 years.  He also served on the executive board for the Trapper Trails Council.  He was a positive influence and relished the time he spent working with the young scouters and staff members during his years at Camp New Fork.  Ray is the recipient of multiple awards including, Eagle Scout, Scouter’s Key, District Award of Merit, Woodbadge Training, Silver Beaver recipient, founders award for Tatanka Lodge for the Order of the Arrow, and the Centurion Award in the Order of the Arrow.  He was a vigil member of the Order of the Arrow.  He attended multiple training sessions including Philmont Scout Ranch.

On June 8, 1991, Ray married Heather Youngberg in Kemmerer, WY.  They lived happily for 27 years together, and she was a blessing to him in his aging years.

Ray was an avid lover of the great outdoors and everything that existed there.  He loved all of God’s creatures, and could recognize a bird by their song.  Ray loved photography, and enjoyed capturing the beauty of the world we live in.

Whether it was along the mail route, up at Camp New Fork, or just sitting in conversation, he brightened those he associated with, with his interpretation of Donald Duck.  He was the best Donald Duck impersonater ever.

The scout motto is BE PREPARED ...... Ray was prepared to enter into the eternities.  A life well lived, an example that will carry on in the lives of others, forever.

Ray is preceded in death by his eternal companion, Shirley Teuscher Ball, their infant son, his parents, grandparents, a brother, Jim Ball, a sister in law, Gloria Ball, a sister, Betty Jean Ames, and a brother in law, Jim Ames, and twin granddaughters, Jessica and Alyssa Ball.

Visitation will be held on Friday, July 27, 2018 from 6PM until 8PM at the Kemmerer LDS Stake Center, 1534 3rd West Ave. Visitation will also be held on Saturday, July 28 from 12 Noon until 1:30 PM. At the stake center.  Funeral services will be conducted on Saturday, July 28, 2018 at 2:00 PM at the Kemmerer LDS Stake Center.  Interment with full military honors will proceed services at the South Lincoln Cemetery, Kemmerer, WY.

To order memorial trees or send flowers to the family in memory of Arnold Ray Ball, please visit our flower store.