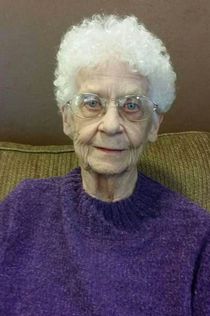 She was born on November 18, 1931, in Bowbells, North Dakota, the third of six children, born to Henry Palmer and Ella Elina (Zacharias) Anderson.  The family moved to Opal, Wyoming when Betty was 12 years of age.  She graduated from Kemmerer High School in May of 1949.

On June 5, 1949, she married Clyde Clark in Kemmerer, WY.  Four children were born to this union, Clyde, Bobby, Dennis, Cindy.

Betty worked several jobs.  She took in mending and ironing for people.  She took care of dry cleaning at the Norge.  She worked at the Frontier Supply, and later she worked for BOCES.  She was the unemployment claimstaker in Kemmerer for numerous years, for the State of Wyoming.
At one time she ran a daycare center in her home, and it was not unusual for her to have up to twenty five children at a time, with five of them under the age of 1.

Betty served as a secretary for many bowling leagues from the time the bowling alley opened until it closed a few years ago.  She was the secretary for the Tuesday and Thursday night mens leagues for many years.  She would cater their annual dinners each year.

Besides bowling, Betty loved Bingo at any place she could play it.  She made beautiful crafts, especially crocheted items.  She was a two time cancer survivor.  Her crochet was her therapy while she was undergoing cancer treatments.

Betty is preceded in death by her parents, her husband, Clyde, and brothers, Eldon, Gayln, and Robert Anderson, and a granddaughter, Shannon Clark Wagner.

Memorial contributions may be made to the American Cancer Society, or to the Alzheimers Awareness Association, or to that of the donor’s choice.

Funeral services will be conducted on Saturday, February, 7, 2015 at 1:00 P.M. At Ball Family Chapel, Kemmerer, WY.  Interment will follow services at the Diamondville Cemetery, Diamondville, WY.

To order memorial trees or send flowers to the family in memory of Betty Jane Clark, please visit our flower store.
Send a Sympathy Card