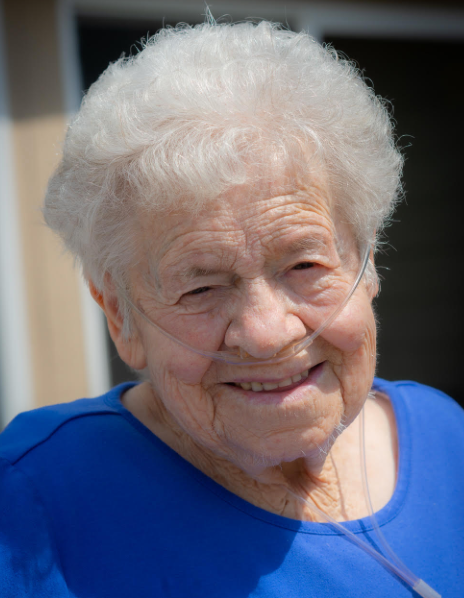 William Lewis moved his family from Kemmerer to the ranch at Fossil in 1928 when Betty was 5 years old.  Betty attended school in the one room school house at Fossil through the eighth grade.  She then boarded with relatives in Kemmerer while attending High School.  After graduating in 1941, she attended Business College in Salt Lake City.  When she completed Business College she returned to Kemmerer and was hired as a bookkeeper by Pat Quealy, but was recruited shortly after by The Lincoln County Treasurer to work in the Treasurer’s Office.  When Emil Zebre was elected Lincoln County Treasurer in January of 1945, he promoted Betty to Deputy Treasurer where she served until June of 1954 when she moved to Florida with her husband.

After the death of her husband Eugene, Betty moved back to Wyoming and moved out to the ranch at Fossil and lived in the old original log cabin. The cabin had running water but did not have indoor plumping. She enjoyed the lighting with kerosene lamps. In 1958 Betty would drive from the ranch daily to work in Kemmerer first for Orlando Maffei at Maffei Motors, and later back as Deputy County Treasurer.   She was hired as Deputy County Treasurer in January of 1960 where she served until the Treasurer resigned in 1980 and she was appointed to serve out the remaining 2 years of the term as Lincoln County Treasurer.

While on the ranch, Betty enjoyed gardening, helping with the calving in the spring and putting up the hay in the summertime. Betty especially enjoyed elk hunting on horseback each fall. Throughout the 1940’s and 1950’s, prior to moving to Florida, Betty was a member of the Alter Society in the Catholic Church.

Betty is preceded in death by both parents William and Gertrude, her husband Eugene, brother Richard, a brother, Dwayne,  sisters Relta Cox and Gracie Lewis.

She is survived by her brother Roland Lewis of Kemmerer and sister Kay Guida Ide of Beaverton, OR.    She is also survived by numerous nieces, nephews, great nieces and nephews.

Betty’s wishes were to be cremated, and Mass of Christian Burial has been scheduled for Saturday, June 27, 2020 at 11:00 AM at St. Patrick's Catholic Church in Kemmerer, with Father David officiating as the celebrant.  Inurnment will follow Mass at the South Lincoln Cemetery, Kemmerer, WY.

To order memorial trees or send flowers to the family in memory of Betty May DesRosiers, please visit our flower store.