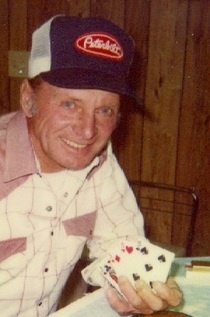 He married Darlene Gilstrap, and together they settled in Kemmerer while Billy worked for Allied Chemical, and some construction, and then beginning his career at Utah Power and Light Co.  He retired from there after over a 25 year career as an electrician.

Billy was an avid outdoorsman, enjoying time fishing, hunting, gardening.  He also enjoyed woodworking.  Billy was a fierce cribbage player, and could beat almost anyone he played.  He was an avid University of Wyoming Cowboy Fan, and a Dallas Cowboy Fan. He served his country in the U.S. Air Force, and received an honorable discharge on November 6, 1958.  Billy also was a member of the Kemmerer Masonic Lodge.  He was a member of St. Patrick's Catholic Church, the Eagles Lodge of Kemmerer, and a member of the Commissary Commandos.  He also enjoyed a good game of pool.  Family came first in Billy's life, and he especially enjoyed his time with his wife, children, and grandchildren.  He will be greatly missed.

Graveside services and inurnment will be conducted on Wednesday, June 10, 2015 at 11:00 A.M. at the South Lincoln Cemetery, Kemmerer, WY. with Father David of St. Patrick's Catholic Church officiating.  Military Honors will also be conducted.

As per his wishes, cremation has taken place under the direction of Ball Family Chapel of Kemmerer, WY.  Memorial donations may be made to that of the donor's choice.


To order memorial trees or send flowers to the family in memory of Billy Glenn Smith, please visit our flower store.