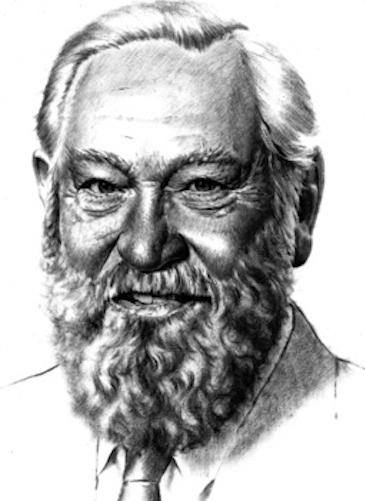 During the night of May 12, 2018, Carl Julius Ulrich passed away from internal complications, peacefully, at home in the old Wyoming town of Fossil.

Carl became a world-recognized icon for his uniquely skilled scientific and artistic preparation of fossil fishes from family quarries in the deposits of an ancient Eocene lake in the high plains just west of Kemmerer, Wyoming.

Carl was the fourth child born to Dorothy Marie Anderson Ulrich, a tall blue-eyed Wyoming woman of Danish descent. Her daughter Elspeth died as an infant in the Canadian grain fields in 1920. Son Wallace was Senior Quartermaster for the U.S.S. Houston sunk in the first few months of the war. Leroy survived the infamous Bataan Death March, tortured and bayonetted he died at Camp Cabanatuan.

Carl’s early years were extraordinarily challenging and when his brothers left for the Navy he was often guided by community leaders who saw his potential and re-routed Carl’s mischief toward the creativity he would discover later in life.

Naturally athletic in elementary through high school sports in the 1930’s and 1940’s, Carl dominated the football field and the basketball court where he could score from impossible places, rallied team play and lost his front tooth without regret.

Like all young boys from the “Greatest Generation” Carl graduated Kemmerer High School and immediately went to war. Boys became men quickly. Following his brothers into the U.S. Navy he trained in dangerous shipboard skills and was shipped out to the Pacific Theater in the gruesome battles of island taking, as America fought toward Japan.

Mid-Ocean Carl was deployed stateside as the “Sole Surviving Son” following the early wartime deaths of his beloved elder brothers, and there served the final months of WWII.

After his return to his hometown, Carl worked at Brilliant Coal Mine, started a taxi company and in 1949 opened a gas station in Diamondville (weeks before the great blizzard of 1949 closed Wyoming roads for most of the winter). He moved on to logging and sawmilling, operated the new giant diesel Marion Shovel at Phosphate Mine west of Kemmerer and then became a Wyoming Game Warden. When threatened with a transfer from his wife’s beloved town, he resigned his commission and began a long employ with the El Paso Natural Gas Company when it moved pipeline operations and refining into Wyoming. During these times he prepared fossil fish in his spare time and cared for his family and community. Not until 1970 did he strike out on his own as an independent businessman and create his preparatory at Fossil, Wyoming, which became world- renowned.

In the spring of 1960, at his kitchen table in Diamondville, Wyoming, after receiving news from the White House, that then-President Eisenhower chose as the National Gift, for Emperor Hirohito of Japan, (himself an amateur ichthyologist) a magnificent large fossil fish Carl had meticulously hand-prepared with a needle scribe. Shirley asked if he wanted Emperor Hirohito to have his work in thinking of the torture his brothers had suffered by Japanese soldiers. Carl’s

response was quick and a life lesson. “I do not know if Hirohito had anything to do with starting the war, but I know Hirohito ended the war and General Togo tried to stop and assassinate him with a thousand troops and still Hirohito persisted and announced to his people, essentially surrender,” he said. “Yes, I want the Emperor to have and know this beauty.”

Hunting and the outdoor life was essential with Carl and he cherished his family, involving them in all the activities available, many of which were essential. Hunting Camp on Carl Creek was a generational tradition and filled the food locker, as did fishing, a skill he vigorously pursued in the thick willows of Hamsfork always with his children and beloved wife Shirley. The two forged a family that also worked hard together quarrying and discovering the fossils and conducting business and science, weaving their philosophy of stewardship. Their example and involvement spurred the creation of Fossil Butte National Monument.

Carl was deeply involved in community service at St. James Episcopal Church, serving for many years as Treasurer and Vestryman, and where in memory of his two heroic brothers he provided a stark wooden cross and white hand plastered wall. From the local Rotary to Gun Club, Referee of sports, to running equipment at times of floods and disasters, to founding the Lincoln County Search and Rescue with ”Old Brownie” a 1960 GMC 4x4 with winch. People counted on Carl.

His ability at horseshoes and humor and cards among other talents were a welcome part of myriad friendships. He is remembered fondly for his long life-time of community love and service and for those twinkling blue eyes, wit, and strength of vision and character.

For anyone wishing to honor Carl Ulrich’s memory, the family suggests contributing financially to sponsor another veteran’s journey toward healing the wounds of war through Wyoming’s Chance Phelps Foundation, www.chancephelps.org.

To order memorial trees or send flowers to the family in memory of Carl J Ulrich, please visit our flower store.