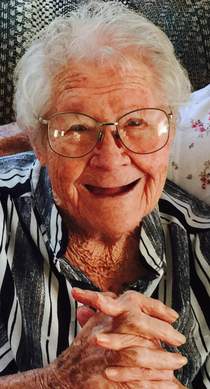 Carrie Fern Borino, died at South Lincoln Medical Center in Kemmerer, Wyoming on December 6, 2015 at the age of 88.

She was born on August 27, 1927 in Parma, Idaho, the daughter of Roy and Ida Marlin.  On June 23, 1945 she married Joe Borino from Diamondville, Wyoming.
Carrie loved to read, crochet, and spend time with family and friends.  Everyone knew her smile, and she would always light up the room.

She is preceded in death by her parents, her husband, a daughter in law, and two brothers, and one sister.

Funeral services will be conducted at the Kemmerer L.D.S. Stake Center on Monday, December 14, 2015 at 1:00 P.M. With Interment to follow at the South Lincoln Cemetery, Kemmerer, WY.  Bishop Destry Dearden will officiate at the funeral services.

Visitation will be held at Ball Family Chapel from 6:00 P.M. Until 8:00 P.M. On Sunday, December 13, 2015 and also one hour prior to the servcies at the church on Monday.
Online condolences may be left at ballfamilychapel.com.

To order memorial trees or send flowers to the family in memory of Carrie Fern Borino, please visit our flower store.