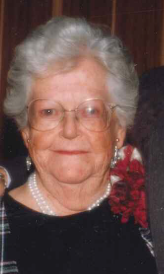 Christina Peart, age 90, passed away on May 29, 2016 at South Lincoln Nursing Center, in Kemmerer, WY.  She was born on October 16, 1925 in Princeton, Oregon, the daughter of Henry Christian Schroth, and Nancy Ellen Young.

She married Richard Lee Peart on November 5, 1948 in Randolph, Utah.  Their marriage was later solemenized in the Salt Lake City Temple in January of 1949.

Christina loved to spend time crocheting, and doing bead work crochet. She was a member of The Church of Jesus Christ of Latter Day Saints, and held numerous postions within the church throughout her life.  She loved to go arrowhead hunting with her family.  She especially enjoyed as the day ended to visit on the telephone with her longtime friend, Audene Thornock.  She loved to be with her family and spend time with all of them.

To order memorial trees or send flowers to the family in memory of Christina Henreitta Peart, please visit our flower store.