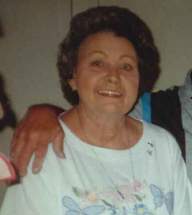 Darlene Gilstrap Smith, age 80, died at South Lincoln Nursing Center in Kemmerer, WY., on March 24, 2016.  She was born on August 31, 1935, the daughter of Claude Leslie and Esther Olla (Wheeler) Gilstrap.

Darlene loved to spend time with her family whom she loved.  Spending time with them was the highlight of her life, especially with her children and grandchildren.  Darlene was a wonderful cook, she enjoyed spending time working in her yard, gardening, going camping, and enjoyed a good game of bingo, and cribbage.  She also loved to gamble.

Darlene is preceded in death by her parents, her husband, Billy Smith in June of 2015, a brother, Paul, and a sister, Jerry.

Graveside services for Darlene will be held on Wednesday, March 30, 2016 at 11:00 A.M. At the South Lincoln Cemetery, Kemmerer, WY. With Father David from St. Patrick’s Catholic Church as the celebrant.  Inurnment will follow services at the cemetery.

To order memorial trees or send flowers to the family in memory of Darlene Gilstrap Smith, please visit our flower store.