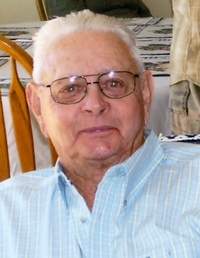 David Marcus Nelson, age 89, passed away on October 18, 2013 at the South Lincoln Nursing Center in Kemmerer, WY.  He was born on August 13, 1924, in Kemmerer, WY.; the son of Marcus David Nelson and Mary Jane (Clark) Nelson.  He married Constance Marie (Vallone) Nelson on November 15, 1945.  They had six children.  Dave was raised on a ranch in Opal, WY.; and later moved to Kemmerer and ran his own sheep outfit.  Later in life he owned Nelson Realty.  Dave was active in local and state politics, serving as President of the Wyoming Wool Grower's Association, Mayor of the town of Kemmerer, and serving on the WY. Game and Fish Commission.  He also was a member of the one-shot antelope club in Lander, WY.  He was also appointed  to the Wyoming Highway Department by Governor Ed Herschler.

To order memorial trees or send flowers to the family in memory of David Marcus Nelson, please visit our flower store.