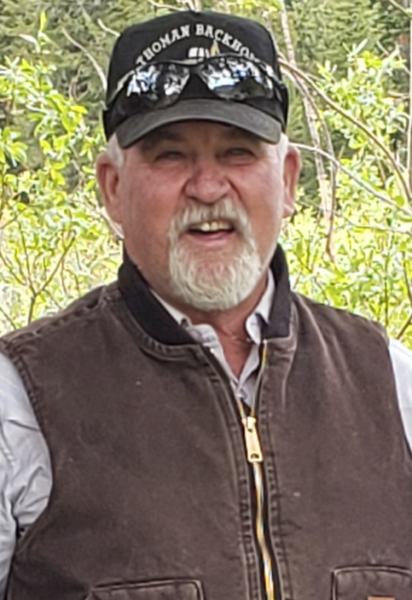 David Henry Thoman, age 67 passed away on March 4th 2020 with family by his side. David was born on February 16, 1953 in Kemmerer Wyoming to Virgil Henry Thoman and Bernice Irene Gamble Thoman. David was the 3rd of six children. He had 4 sisters, Lynell Elmlinger, Patsy Charters, Beverly Carroll, and Margret Vickery and one brother, Blaine Thoman.

David attended school in Kemmerer, Wyoming and later Big Piney, Wyoming. David married Toni Hale in 1969 and to this marriage brought 3 children. Ashlee, Tanna and Clayton Thoman. David and Toni later divorced. He then married Sonia Ross. To this marriage was born Kaylyn Thoman. David and Sonia later divorced as well. He then found the love of his life Tina Thompson. They were married March 15th, 2000.

David never knew what he wanted to be when he grew up. He was always torn between ranching and construction. He was raised on ranching but got his first taste of construction when he went to work for Dennis Hacklin. He worked a short time at Texaco pumping wells. He then started his own construction and roustabout company. Being his own boss served him well. However, he could not get the cow poop out of his brains. He got an opportunity to lease the Jones Ranch and follow his cowboy dreams. He wanted to raise his family the cowboy way. He then got the opportunity of his life to own a ranch of his own. He bought the Maxon Ranch south of Rock Springs Wyoming. He loved the ranch so much that he brought his child hood hero, Vince Guyette, to show him what a thousand cows on a hundred hills looked like. As Vince always told him, “He had run a thousand cows on a hundred hills.” David sold the ranch and returned to LaBarge where he started Thoman Backhoe Service. He again decided to go ranching, this time in Oklahoma. He was always up for the next adventure with his wife Tina by his side. His love for Wyoming drew him back to LaBarge once again, where he continued to run Thoman Backhoe Service. He always enjoyed spending time in the mountains camping and horse back riding with his family and friends. He loved to tease and joke with anyone he came across. He was full of life, laughter and adventure.

To order memorial trees or send flowers to the family in memory of David Henry Thoman, please visit our flower store.