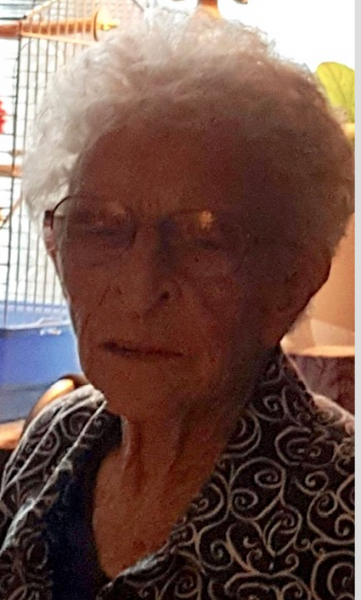 Delora Brown Bateman, age 94, passed away at her home in Diamondville, WY on September 5, 2019.  She was born in Woodruff, UT on November 9, 1924, the daughter of William Ezra and Jeanette Pauline (Nielson) Brown.

Delora was raised on the ranch eighteen miles north of Evanston, WY; which remained a very fond place to her throughout her life.  She attended schools in Woodruff, Randolph, and some in Evanston.  In 1942 she was an attendant to the queen for the Cowboy Days Celebration.  When she was in her teens, she drove taxi in Evanston.  She cleaned the Strand Theatre and then went to work for Safeway Food Stores for many years, retiring in her early 70’s, and then became a surrogate mother and friend to  her grandchildren, and great grandchildren.

Delora and her husband moved to Cheyenne until his death in 1979. She then moved back to Kemmerer to work at Safeway Food Store again, after being a security guard at the Naughton Power Plant.  She instilled hard work, integrity, and loyalty and grit to everyone she came in contact with. She was devoted to her entire family.

Graveside services will be conducted on Saturday, September 14, 2019 at 11:00 A.M. At the Evanston City Cemetery, Evanston, Wyoming, with Bishop Jeff Nelson officiating.  Inurnment will take place at the Evanston City Cemetery.  Cremation has taken place under the direction of Ball Family Chapel of Kemmerer, WY.  Online condolences may be left at ballfamilychapel.com.

To order memorial trees or send flowers to the family in memory of Delora Bateman, please visit our flower store.