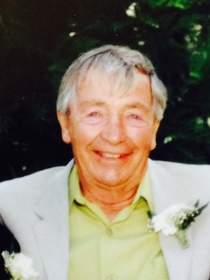 Donald George Wagner, long-time Kemmerer resident and local businessman, died after a battle with lung cancer at the age of 92.  He was born in Gillette, WY on August 23, 1921 to Phillip and Lenore (Fox) Wagner.  He was the oldest of five sons, and was raised and educated in the Gillette area.  His parents owned operated two different homesteads and multiple businesses in the Gillette area in which Don helped operate while growing up.

Don attended Gillette primary and secondary schools, graduating in 1939.  After graduation he enlisted in the National Guard and then attended the University of Wyoming, majoring in mechanical engineering.  In August of 1942, after three years at the University of Wyoming, he joined the US Navy Reserves and  continued his studies at Iowa State College in Ames before going to a 15 week Officer’s Training Course at the New York U.S.N.R. Midshipman's School, where he received his commission as an Ensign in the United States Naval Reserve.  He was assigned to sea duty as an engineering officer.  He served on a mine sweeper, The USS Bullfinch in the Atlantic, and in the South Pacific on an Escort/Destroyer, The USS Emery.  On 09/25/1945, Don was awarded the Operation Star for participation in the Iwo Jima Operation and on 10/27/1945 he was authorized to wear the World War II Victory Medal.  He received the Certificate of Satisfactory Service on 01/21/1946 after World War II ended.

While attending the University of Wyoming, Don met Barbara Bertagnolli and they later married in 1944 while he was training in Miami, FL.  After the end of WW11 Don joined Barbara and made his home in Kemmerer, WY.  where he established and operated multiple successful businesses.  Seven children were born from this union:  David (Mary) of Arnold, CA; Jennifer Lease of Las Vegas, NV; Thomas (Tricia), John (Rebecca), Eric (Jeanne), Mark (Susan), all of Kemmerer; and Donna Nunez (Jerry Guillen) of Rock Springs, WY.  Don and Barbara divorced in 1969.

In 1971, Don married Phyllis Clark.  After Don retired from his long-time Kemmerer business (Don’s Service And Supply) in 1987, he and Phyllis moved to Thermopolis, WY to retire.  Being the hard worker that he was, retirement did not sit well, so he decided to go to work with his brother Bill, upgrading US missile bases in the Rocky Mountain Region.  Don enjoyed working and was always interested in mechanics.

After 30 years of marriage Don and Phyllis divorced in 2002.  He then relocated back to Kemmerer to be closer to his family, where he continued to work between the two Service Stations until he became ill at the age of 92.  Don was a member of the St. Patrick’s Catholic Church, and enjoyed attending the Kemmerer Senior/Friendship Center.

He was preceded in death by his parents, one grandson, Shawn Wagner, his brothers, William and Phillip, and his ex-wife, Phyllis.

To order memorial trees or send flowers to the family in memory of Donald George Wagner, please visit our flower store.