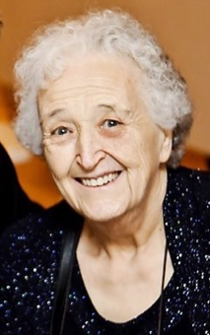 On November 10, 2014, Donna Failoni died peacefully at her home. She was 80 years old. Donna was born September 28, 1934 in Frontier, Wyoming to Cora Eleanor Porter and Willard Alonzo Chipp. On June 28, 1952, at 17 years old, she married Matt Failoni Jr. They were married for 52 years, he preceded her in death 10 years ago. The two had four daughters, Eileen (Cole-deceased) Jackson, Nancy-deceased (Joe) Colton, Lori (Murph) Roberts and Julie Welsh. Her greatest joy in life was her children, grandchildren and great-grandchildren. Nothing mattered more to her than all of them: Matt (Lisa) & Karli Jackson, Truman (Angie) Zach and Regan Jackson, Dillon (Shelly) & Scarlett Jackson, Tracee (Justin) & Cora Davis, John (Sabrina) & Braxton Colton, Mary (Ty) Jones, Baylee Colton, Brandon Welsh and Brian Welsh. She was preceded in death by both parents and one brother Willard Chipp. She is survived by 2 sisters in law and numerous nieces, nephews and cousins.
When she married Matt, they resided in Nugget, Wyoming, at the Failoni family ranch, and they later moved into Kemmerer. Donna held several jobs including Mom, ranchers wife, the Apollo Drive Inn, Montgomery Wards, Farmer Jack’s and Safeway, where she worked for 25 years. She was a kind soul and helped so many people through her generosity and kindness.
Donna was very protective of her family and didn’t want them ever getting to far away. Her family describes her as a professional worrier, and she would say, if she didn’t have something to worry about, she would think of something.
For years, she was an avid reader, again in her words, “I’ll read anything I can get my hands on.” which made her the perfect choice when grandkids needed help with history, trivia or spelling homework. She enjoyed any family get-to-gethers, and was always happy to supply enough food for an army.
Donna/Mom/Grandma will be dearly missed by all that knew her. She leaves a kindness void in each and every heart she met.
Services will be held on Friday, November 14, 2014 at 11:00 A.M. at the LDS Stake Center, with a viewing to be held one hour prior to the services.

In lieu of flowers, the family suggests donations be made to the charity of their choice.

Online condolences may be left at ballfamilychapel.com.
To order memorial trees or send flowers to the family in memory of Donna Jane Failoni, please visit our flower store.