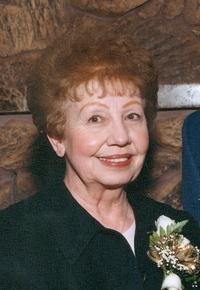 Donna was born in Provo, Utah to Walter and Cecil James on April 23, 1929. She was the third of four children. Donna graduated from Provo High School in 1947. She married James E. Lotz on December 27, 1950 in Elko, Nevada. The couple had two children. They made their home in Kemmerer, Wyoming in 1962 where her husband worked for the Utah Power and Light Company. Donna worked as a classroom aide at Kemmerer Elementary and as a clerk in the Lincoln County Assessor’s Office.

Donna was a fifty year member of the Wyoming Chapter of the Order of the Eastern Star. She enjoyed spending her afternoons at the Senior Center, watching old black and white movies, and spending time with her family and loved ones.

She is preceded in death by her husband, James E. Lotz, her parents, and her sister, Thelma Robinson.

The family has asked that memorial donations be made to the Kemmerer Senior Citizens Center.

To order memorial trees or send flowers to the family in memory of Donna Lotz, please visit our flower store.
Send a Sympathy Card