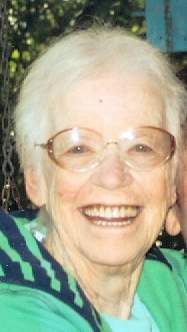 Dorothy Jean Borino was born at home on July 21st, 1931 in Toronto, Canada to Irene and Archie Baxter.  Over the years her family lived in Toronto amd various places in the eastern provinces of Canada.  Dorothy showed great artistic talent and they provided her with much enjoyment.  Her hobbies included painting, drawing, sewing, quilting, knitting and crochet.  She also made beautiful porcelain dolls which she hand painted and hand sewed clothing for them.  Her family and friends were the recipients of her treasures, all made with love and care for the chosen loved ones.  New babies, such as her grandchildren and great-grandchildren were spoiled by special knitted outfits, baby quilts and smoked dresses.  These are all cherished.

Dorothy, married at a young age and had four children, Irene, Shirley, Mariette and George.  Her family and being a homemaker were the priority during these years. She was an amazing cook, baking delicious homemade baked goods and food.  She was a great story teller, creating characters that we as children would rush home from school to hear what was happening next.  There were even drawings at times of the characters she created.  These were wonderful years for us to be children.

In 1967 Jere Borino came for a visit with a cousin after going to Expo in Montreal.  Dorothy immediately was impressed by his manners and his family history.  She wrote to his father Rem to let him know what a wonderful son he had raised.  This was a start of a pen-pal relationship that grew into a romance with Dorothy meeting Rem, moving to Diamondville  and marrying the man, who she shared the rest of his life with.  There was a bonus as well, two additional children to love and care for; Jere and Jeanie!

Dorothy and Rem married June 20th 1971, and she was starting a new chapter in her life with Mariette and George.  Life was not always easy but she was always up for a challenge, coming from a big city of Toronto to a small mountain town in Wyoming, was a big change but Dorothy jumped in head first!  She had always been a bit of a dare devil would try most things once!  She rode horses, set up the hunting camp brining some of the best and unexpected food to camp.  She would feed the moose and deer hay while the rest were out looking for these same animals.  She helped butcher the meat and get it ready for the rest of the year. When she got older and wasn't up to going hunting she used  this time to visit family back in Canada.  She looked forward to the visits with her parents, sister Shirley and brother-in-law Jack, brother Ross and his wife Elinor along with daughters Irene and Shirley and son-in-laws Dave and Tom.  Her family expanded over the years with 8 grandchildren and 10 great-grandchildren.  Her love to all of them is well documented with all the photos that she had surrounding her in her home.  Dorothy suffered great losses of loved ones, her parents, her grandson John and son George, were especially difficult as they were so young and so outside the natural order.  She moved countries, lost her home in a gas explosion, been flooded out, but she stood fast and carried on doing what needed to be done!  In August of 2003 she lost Rem the man she was growing old with.  She settled into a life on her own, the Senior Center being a place to go for friendship and activities helped along with her tea buddy Gramma Mary.  Both Jeanie and Jere were close by to ensure that she was well looked after as well as other family and friends.  This has been a great comfort for her Canadian family so far away.

In 2011 on her 80th Birthday she has surgery at the Huntsman Cancer Hospital, it was touch and go for awhile but she rallied and returned to her home a little slower perhaps but the same loving Dorothy we all knew and loved, back to cooking and spoiling her family and friends.  Dorothy has been there for many of us, a sympathetic ear, loving, enveloping hug or a kick in the butt, you got what you needed at the time.

Dorothy passed to join her loved ones with Jesus in the early morning of April 29, 2014, surrounded by her five remaining children in peace ready for her next adventure.  She has been a wonderful daughter, sister, wife, mother, grandmother, great grandmother, family member and friend.  She will be missed.

Memorial services will be conducted on Tuesday, May 6, 2014 at 2:00 P.M. at  Ball Family Chapel.  Friends may call one hour prior to services at the funeral home.  Inurnment will follow services at the South Lincoln Cemetery, Kemmerer, WY.
To order memorial trees or send flowers to the family in memory of Dorothy Jean Borino, please visit our flower store.