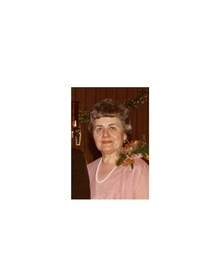 Elizabeth M Fagnant, 93, of Kemmerer Wyoming, died Friday, October 3, 2014 at the South Lincoln Medical Center, Kemmerer, WY.
Elizabeth (Betty) was born September 27, 1921 in Little Chute, Wisconsin to John and Elizabeth Wynboom. Betty’s father died when she was very young and life was not easy for her single mother and older brother. They survived the depression by renting out rooms in their home to boarders and later moving back to her grandparent’s family farm until Betty started High School where she graduated from St. Joseph’s Academy in Green Bay, WI.
Betty attended St. Mary’s Nursing School in Green Bay, WI for 3 years and graduated 2nd in her class. She accepted surgical nursing assignments at various hospitals in Colorado, California, Illinois and Wyoming. It was in Kemmerer Wyoming where she met Richard D. Fagnant and they were married on November 4, 1953.
She was a loving wife and mother and continued to work part time as a nurse for many years. She volunteered for many organizations such as Cub Scouts and the Senior Citizen’s Health Fair. She later worked at any position required of her for the family businesses, The French Hotel, Quality Foods, Qual-Mart and Quality Builders & Realty where she worked until she was 83 years old.
Betty was also a very devout Catholic and an active member of St. Patrick’s Catholic Parish. She attended daily mass regularly and was a member of the Altar & Rosary Society for almost half a century.
She was always a caregiver. She brought her mother, whom had suffered a stroke and was invalid, to Kemmerer to live with the family in 1968 and continued to care for her until her death in 1980. She cared for her late husband Richard during his progression of Parkinson’s disease, first at their home and then at South Lincoln Nursing Center. She spent much of her day helping with his care and shared most meals with him. Due to her own failing health, she later joined Richard as a resident in 2011. She enjoyed her time there playing Poker, Bingo and becoming a master of the IPad. She considered the staff as her second family and she cared for them deeply.
She is survived by her loving children: Sons: Rick (Babes) Fagnant, Robert (Debbie) Fagnant, David (Jeanette) Fagnant, Michael (Suzanne) Fagnant and a daughter, Pamela (Bryan) Hassler; her grandchildren; Ben, Annie, Nick, Cara, Matt, Sarah, Shawn, Stephen, Josh, Nate, Carly, Mitch & Caity and great-grandchildren; Bailey, Carson, Raegan and Weston.
She was preceded in death by her husband Richard and her two brothers Simon & George.
The Viewing and Rosary will be Thursday, October 9, 2014 at 6:00 pm and 7:00 pm respectively at St. Patrick’s Catholic Church in Diamondville, Wyoming. Funeral Mass will be Friday, October 10th, 2014 at 10:00 am at St. Patrick’s Catholic Church with interment following at the South Lincoln Cemetery. Reception to follow at St. Patrick’s Catholic Church Hall.
Arrangements were made under Ball Family Chapel, of Kemmerer, WY. Memorial Donations can be made to the South Lincoln Nursing Center, 711 Onyx Street, Kemmerer WY. 83101.
To order memorial trees or send flowers to the family in memory of Elizabeth Mary Fagnant, please visit our flower store.