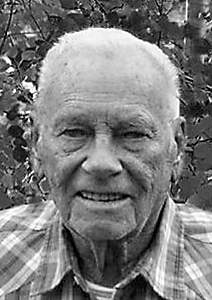 Elmer Eberious Nelson died Oct. 19, of natural causes in Kemmerer. Elmer was born to Samuel and Amelia Nelson in Meadowland Township, Beltrami County, Minnesota, on April 1, 1921. He married Gertrude Johnson in 1942. They lived in Minnesota for several years before moving to Salt Lake City, Utah, and then to Kemmerer.

During his lifetime, he had many occupations, but none as fulfilling as the early years farming his own land in Carp, Minnesota. In Salt Lake, he was a heavy equipment operator in construction as well as for the former Mountain Fuel Supply Company, and a fuel truck driver at the Tooele Army Depot.

He was a World War II veteran who served in the Army’s Pacific theater. He loved the outdoors, hunting, fishing, and boating were some of his favorite pastimes.

He was preceded in death by his wife and all of his brothers and sisters. He is survived by his children: Alma Brotherson, Barbara Smith, and Kenneth Nelson of Salt Lake City, Utah; Cindy Miller of New Harmony, Utah; and Douglas Nelson of Cheyenne; as well as grandchildren, great-grandchildren, sons-in-law and a daughter-in-law.

An amazing man, still living independently at 95 years old, he will be missed for his stories, his sense of humor, his love and support of family, and the mischievous look in his bright blue eyes.

No formal service is planned. He will be buried where he spent his happiest days, in Minnesota.

To order memorial trees or send flowers to the family in memory of Elmer E. Nelson, please visit our flower store.