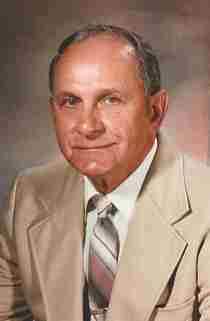 Frank William Klun aka “Bill”  1928-2014
Frank William Klun aka “Bill” passed away at South Lincoln Medical Center in Kemmerer, Wyoming on Sunday, Marh 16, 2014, from complications from Type 2 Diabetes.  He was  85 and one half years.  He was born on July 27, 1928 in his home in Diamondville, Wyoming, the son of Andrew Klun Sr. and Molly Kochevar Klun.  He joined a brother, Andrew “Andy” Klun Jr. and a sister Margaret “Margie” Klun.  He graduated from Kemmerer High School with the Class of 1946 and was drafted into the United States Army in 1951, where he served honorably in the Korean War.  He was honorably discharged from the military in September of 1956.
Bill married Patsy Lee Rose on November 23, 1957.  They raised three daughters,  Natalie, Cindy, and Michelle.  Patsy passed away in 1985.  In 1994, his first grandchild, Taylor Frank joined the family, followed by Courtney Lee in 1997.  His grandchildren quickly became the pride of joy of his life.
Dad’s first job was with Frontier Supply.  His life long career started with El Paso Natural gas which later became Northwest Pipeline then a part of the Williams Companies, where he retired in 1985.  He also had many side occupations over the years, bought and sold various properties and businesses, and was passionate about collecting many different things.
After his “retirement”, Dad always kept himself and others busy with one project or another.  He enjoyed pouring concrete and doing other odd jobs with his best buddies Gene Bertagnolli and Glen “Jiggs” Dolar, made annual pilgrimages to Fruit Heights, Utah to pick-up and deliver cherries and peaches from Mannings Orchards to all his Kemmerer friends, looked forward to driving vehicles to and from various locations for E&L Motors, and spent many years passionately creating unique yard displays.  Dad loved hosting various friends and extended family, as well as the Class of 1946, for breakfast on Sunday morning, annual birthday barbeques or impromptu dinners at his home.
He was an active participant at the Kemmerer Senior Citizens Center where he also served on the board for several years.  He became an avid pool player and drove his “pool buddies” to pool tournaments at other senior centers in Wyoming.
Bill was preceded in death by his parents, Andy Sr. and Molly Klun, his siblings, Andy Jr. and Margie, and his wife, Patsy.
He is survived by his daughters, Natalie Klun (Trace Bunderson) of Salt Lake City, UT.; Cindy Waisath (Colby) of Chandler, AZ.; and Michelle Klun (Judy Fashender) of Magna, UT.; his two grandchildren, Taylor Frank Waisath, and Courtney Lee Waisath, also from Chandler, AZ.; as well as many special friends.
Dad’s final request was that we all shed only “happy tears” and celebrate his “good long life of 85 and one half years”, because according to him “at this stage in life you start counting the halves again”.
The family invites you to join them in remembering and celebrating Bill’s life on Friday, March 21, 2014 at the South Lincoln Training and Event Center.  A viewing will begin at 10:00 A.M., with funeral services at 11:00 A.M.  Interment with full military honors will follow at the South Lincoln Cemetery, Kemmerer, WY.
In lieu of flowers, memorial donations may be made to the Kemmerer Senior Citizens Center.

To order memorial trees or send flowers to the family in memory of Frank William "Bill" Klun, please visit our flower store.