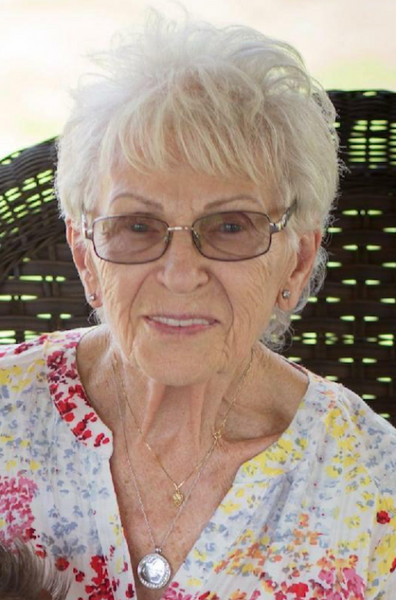 Geraldine Laverne Trogdon Watts 93, died peacefully on her birthday, the evening of July 23, 2020, surrounded by the love and prayers of her family.  Born July 23rd 1927 in El Segundo CA to Verne E. Trogden and Ida Mae Southard where she spent her younger years and graduated high school.

She met her husband Boyd Watts at Douglas Aircraft where she delivered blueprints on roller-skates to the engineering department.  The same one Boyd had worked his way up to.  They were married on April 7th, 1945.  Shortly after which the couple moved to Kanosh, UT.  A sacrifice made in order for Boyd to take up working the family farm.  Although that meant leaving the ideal lush beauty of her home in California, including the beaches she loved so much in exchange for the comparatively bleak volcano-ridden dessert of Southern Utah she still managed to make their residence in Kanosh a beautiful home for her family, raising six children including four girls and two boys in the process.

Whilst helping Boyd with the many duties of the farm, and tending to the needs of raising six children, she also maintained active involvement in her church including holding many callings, and being an involved member of the tight-knit community whom many looked up to.

In 1970 the family made a big decision and moved to Gunnison Colorado where Geraldine continued to support her husband in the family’s business of owning and operating the 50-Hi Motel & Trailer Court.  She was actively involved in the round-the-clock demands of the business such as managing the office, cleaning rooms, doing laundry, etc. in order to keep the day-to-day operations running smoothly.  While of course, continuing to hold down a home and take an active role in raising her children.

Although her marriage to Boyd ultimately didn’t work out, after moving back to Holden in 1977, Geraldine’s life had opened a new chapter.  One where her family, at different times throughout the years, had the privilege of experiencing her loving influence in their homes.  At different times she went on to live in Las Vegas with oldest daughter Sharon, as well as her daughter Jan in Wyoming where she was an active influence in helping raise her grandchildren.  Many of her grandchildren had the sweet experience of being able to have her stay in their home from time to time over the years, building a treasure trove of memories in the process.  Providing a rare reservoir of cherished memories now left to be retrieved with fondness as she is remembered.

She was known for having a highly revered work ethic and possessing many talents.  A few of which include: being a remarkably good cook, a gifted and resourceful seamstress, quilt-maker, one who possessed impressive athletic ability, beautiful artistry expressed in crocheting, noted physical beauty, a seemingly insatiable appetite for reading, and an appreciation for classical music.

Geraldine’s faith in God was a cornerstone in her life.  She was a valiant member of The Church of Jesus Christ of Latter Day Saints, and in 1984 at the age of 57 made the decision to serve an L.D.S.  mission in Gilbert, AZ.  She remained unwavering in her commitment to her faith in God right up to the end.

For many years Geri was able to spend time with her dear friend and sidekick Shirley Moore.  With Shirley’s seemingly endless wellspring of energy and adventuring spirit combined with Geri’s more careful and reserved disposition the two complemented each other well making for a great team.  The two made many memories traveling the world and experiencing life together.  However, with time stopping for none, and age ever increasing, Geri was unable to keep up with the blistering pace and energy of her best friend.  At which point she made the decision to take up residence with her son Brandon and wife Connie Watts in Fillmore, UT in 2017.

In the Spring of 2019 Geraldine was sealed to Boyd for time and all eternity in the Payson, UT temple.  Something she had long hoped and waited for.  Although maintaining great health and a sharp mind far into her golden years, the toll of multiple surgeries eventually led her to persistent requests to be put in the professional care of the Fillmore long-term care unit where staff did so with appreciated personable attention and love. Thankfully this still put her in close proximity to family who she was able to see daily.  This also made visiting Grandma the popular must-stop-destination for any who passed along the I-15 corridor.  Even in her older age, Geri was a joy to be around.  Remaining her positive and pleasant self despite the unyielding wearing down effect time has on us all.  This was evidenced when the KSL news-crew caught wind of her and decided to showcase her bright spirit and charm in a news story regarding the health-care facilities in Fillmore.

After the unexpected arrival of the Wuhan virus she once again made a move to Wyoming where she could be under the personal undivided care of her daughter Jan.  A place she would remain attentively tended to until her final breath.

Unconditional love was a signature trademark of hers.  Something impressed particularly convincingly into the hearts of her grandchildren. She was a woman dedicated to her family.  Observant and sensitive to the needs of those around her.  Although she maintained a gentle, soft-spoken demeanor, and wasn't an attention-seeker she also knew when to stand her ground with conviction.  A woman of quiet strength and humble wisdom.

Her son Brandon has said she is the “Queen of the Clouds” for she always enjoyed finding meaning in the handiwork of God. Hers is a legacy of resilience, gentleness, and love.  A cherished gift from a woman of strength imparted to all in her family who remain forever grateful as they look to model her example in their own journey of life.

To order memorial trees or send flowers to the family in memory of Geraldine LaVerne Watts, please visit our flower store.