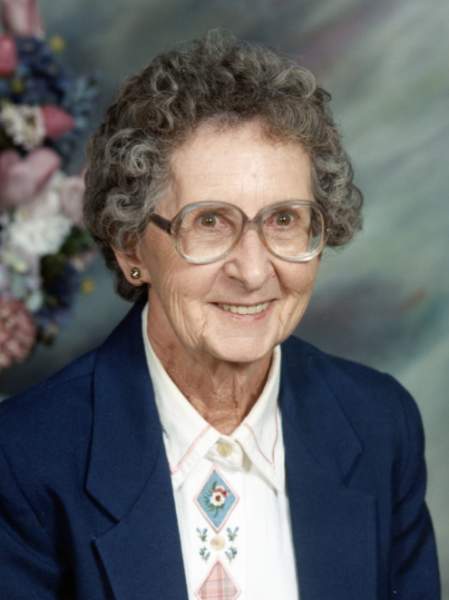 Ida Peternal Barlow died peacefully, after a short bout with pneumonia, at the home of her niece Kelly Peternal Thoman, on the Thoman ranch near Riverton, WY. Ida would have celebrated her 98th birthday on October 22.

Born in Kemmerer, WY, of Slovenian immigrants, Johann Peternel and Rosalia Hvala Peternal, just a year after the end of World War I, Ida lived a full life in her hometown until moving in 2009 to live with her niece Kelly and her husband Bob Thoman. In Kemmerer, Ida worked for many years at the Union Pacific Railroad Company as a telegrapher, was a loyal member of St. Patrick's Catholic church, and was active in many civic organizations, BPW, in local bowling leagues and canasta clubs with her many friends.

Ida’s older sister Rose was born in November 1917 and died in January of 1918, thus making Ida the eldest child, who later cared for her widowed mother and helped her brothers in the operation of the Union Meat Market on Main Street in Kemmerer and the Peternal Brothers ranches on the Ham’s Fork Creek: the present Bob and Shirley Peternal ranch, the former “Sneddon ranch” further upriver, and the “Wasatch ranch” near Granger.

When Ida was not yet two years old her brother John was born; he later married Edna May Maki and settled on the first of those ranches, where their son Bob grew up. A year and a half later her brother Otto was born; in 1963 he married Helen Farrell and spent the rest of their lives in Kemmerer. Some six years later her youngest brother Bill was born; in 1953 he married a school teacher from Boston, Nancy Farrell, who settled in Kemmerer, eventually becoming a member of the Wyoming State House of Representatives, Lincoln County commissioner and co–founder of the Frontier Fossil Museum in Kemmerer. Nancy was the younger sister of Otto’s wife.

Ida lived through World War II, during which her brother Otto did military service, and the Korean Conflict, in which her brother Bill served. When she was 25 years old her father died after having worked in the coal mines, started a grocery business and begun ranching. Ida lived with her mother, Rose Peternal, above the Union Meat Market in Kemmerer until Rose’s death in 1979. She later married a longtime coworker at Union Pacific, then widower, Dean Barlow, who himself died in 1984.

Ida outlived her three brothers, John, Otto, and Bill, and was preceded in death by her sister Rose, her parents, John and Rose, husband Dean, a niece, Amy Peternal (2005) and a great-great nephew, Chance Thoman (2001).

To order memorial trees or send flowers to the family in memory of Ida Barlow, please visit our flower store.