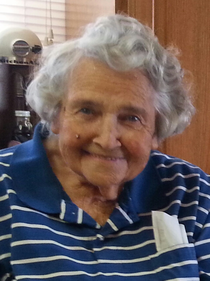 Jean Lenora Edinger, age 89, passed away on September 25, 2015 at South Lincoln Medical Center in Kemmerer, WY.  She was born on September 10, 1926 in Blunt, South Dakota, the daughter, of John and Alta (Gandy) Osterkamp.  She married Douglas Dean Edinger in November of 1950 in North Dakota.

Jean loved to garden, and work on crafts.  She had an amazing ability to cook, and she loved to spend time in the kitchen preparing meals, and sharing her talents with those she loved, her family, and her friends.  Her family was her upmost pride and joy.  She loved them with all her heart, and she enjoyed time spent with them.

She was preceded in death by her parents, her husband, Douglas, one brother, Dale Osterkamp, and a sister, Thelma McCully.

Online condolences may be left at ballfamilychapel.com.
To order memorial trees or send flowers to the family in memory of Jean Lenora Edinger, please visit our flower store.