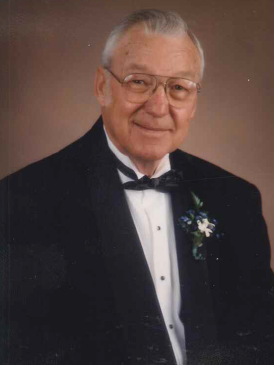 Jerry Dellas Floyd, age 85, passed away June 28, 2016, with his daughter in Delta, Utah.  He was born in Bloomington, Idaho on July 5, 1930 to Jessie and Ruby Ada (Palmer) Floyd.  His mother passed away at his early age of 5 and she was preceded in death by Jerry’s oldest brother Palmer Floyd.

His father worked many hours for the railroad, so Jerry spent most of his time with older Brothers Leonard Wally Floyd and Stanley Jay Floyd.  His father was relocated to Kemmerer with the railroad, bringing Jerry and his family to reside here.  Jerry received a graduate degree from Kemmerer High School in 1949, but had joined the United States Navy prior to the graduation ceremony.

Jerry served our country in the Navy until he was honorably discharged from active duty, and returned back home to Kemmerer where he married the love of his life Marguerite Elaine Kinghorn, on September 22, 1951.  After they were married, Jerry was called back to active duty and stationed in Corpus Christ, Texas.  Here they welcomed their first child Janet ReNae Floyd.  Jerry was officially honorably discharged from the service on October 21, 1953.  He and Elaine took their family and moved to Casper, Wyoming where were they welcomed their second child Dennis Max Floyd on May 5, 1955.  They remained in Casper until 1962, when they returned to Kemmerer and Jerry began his career with the local coal mine where he worked until he retired in 1992.

Jerry was preceded in death by his wife Elaine, son Dennis, Parents Jessie and Ruby, siblings; Wally, Jay, Lois, and Ravenna.  He is survived by his daughter ReNae (Bill) Little of Delta, UT,  Seven Grandchildren and seventeen great-grandchildren.

To order memorial trees or send flowers to the family in memory of Jerry Dellas Floyd, please visit our flower store.