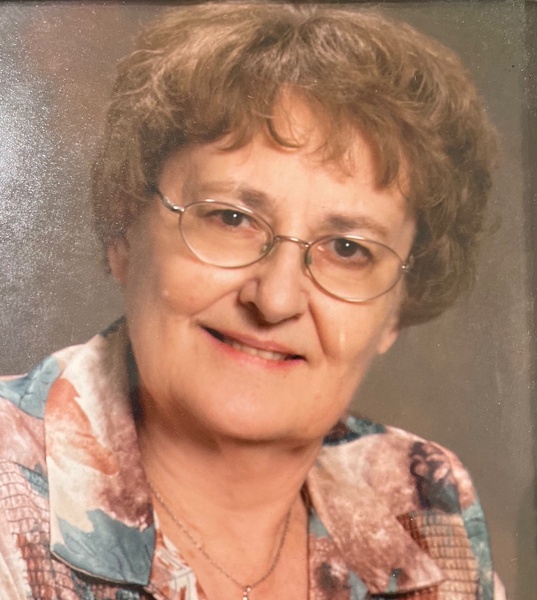 Karen Margaret Spears passed away on October 17, 2021 at the South Lincoln Medical Center in Kemmerer, Wyoming. She fought a very long and courageous battle with COPD that spanned decades.

Karen was born to Raymond and Frances Kominsky (Rolih) on her mother’s birthday, which was April 19, 1945.
She grew up in Frontier, Wyoming and was the second oldest of five children. She had many stories of her childhood surrounded by a large family and many friends in Frontier. Some stories contained amazing feats and others were comical follies. She remained a Wyoming resident for all of her life. Her furthest journey was a European trip with her mother where they traveled to several different countries.
In 1962 she married Robert LeRoy Spears. They later divorced.
Her favorite pastimes were reading, crocheting and other crafts. In her younger days she was quite accomplished and completed several oil paintings and pencil drawings.
Her television was never off and was turned to the Hallmark Mystery Channel, Fox News (she never missed The Five), old westerns and EWTN for her Catholic shows and masses.
She never missed the opportunities to solve every daily crossword, sudoko and word scrambles in the newspapers. There were also puzzles in books and on her Kindle that she would solve throughout the day. All puzzles were solved quickly and then she would move on to the next one. During other intervals she would check on her winnings from her favorite slot machine games and checking numbers on her Wyo Lotto tickets.
She remained a devout Catholic and was a member of the Saint Patrick’s Catholic Church and for a time in Riverton was visited by Eucharistic ministers from Saint Margaret’s Catholic Church. Her incredible faith was evident to all who knew her.
She is survived by her son Brian Spears, her daughter Elizabeth Buschelman (Scott), her sisters Mary Beth Ferrarini (Chuck) and Ruth Anne Miller (Wes), brother Dennis Kominsky (Kathy) and sister-in-law Sharleen Kominsky. She is also survived by grandchildren and bonus grandchildren Justin Whitmore (Melissa), Rebecca Jevne (Troy), Krista Buschelman and Kimberlee Liebelt (Nathaniel). She has numerous great-grandchildren, great-great-grandchildren, nieces, nephews, great-nephews and great-nieces.
She was preceded in death by her parents, parents-in-law Robert and Mary Spears, infant son Robert Lamont, brother Raymond Joseph Kominsky, daughter-in-law Aleena Spears and granddaughter Jessica Linnan. Also preceding her was long-time friend and sister-in-law Norma Jean Head.
The family would like to express their gratitude to Brooke who took such good care of her during her visits.
In lieu of flowers donations can be made to any of her favorite charities which include; Wounded Warriors, Saint Jude’s Hospital, Saint Patrick’s Catholic Church or EWTN.
During this time we ask that you respect others in whatever their mask or vaccination beliefs are as we come together to celebrate her life with kindness and acceptance of others.
A rosary will be held at 5:30pm on Monday, October 25th at Saint Patrick’s Catholic Church in Kemmerer. A Catholic Mass will begin at 10:00am on Tuesday, October 26th at Saint Patrick’s Catholic Church with interment following at the Kemmerer Cemetery.

To order memorial trees or send flowers to the family in memory of Karen Margaret Spears, please visit our flower store.