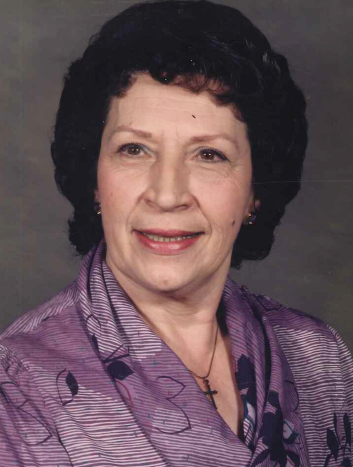 Born January 24, 1928, in Naples, Italy, to Michele and Josephine Allario Miano, Katie grew up living the daily repression of Mussolini’s fascist rule. She endured poverty and experienced first-hand the horrors of World War II in Italy’s most-bombed city. After her five years of formal education concluded, Katie learned tailoring, a skill she would use throughout her life.

After the Nazis were expelled from Naples, Allied forces filled the city. Among them was an American soldier named Frank Kiren, Jr. Katie and Frank met, fell in love, and were married in Naples on January 21, 1945. The following year, Katie boarded the SS Vulcania, a U.S-bound ship filled with other “war brides,” to embark on a new life journey on the other side of the Atlantic.

She fondly remembered arriving in New York Harbor on April 29, 1946, under the welcoming gaze of the Statue of Liberty. From New York, Katie traveled by train to Diamondville, Wyoming, and was reunited with her husband Frank. The couple had four children: Gary, Beverly, James, and Frankie Ann. During Katie’s pregnancy with Frankie Ann, Frank died suddenly on July 7, 1954, leaving her with four young children to raise.

On March 26, 1952, Katie became an American citizen. She considered that day a defining moment in her life. She loved the United States and cherished her citizenship. Having grown up under oppressive authoritarianism, she was keenly aware of the freedoms and liberties she enjoyed in this country and always did her part to be a responsible citizen. Her patriotism was strong throughout her life.

Katie married Robert “Bob” Wylie Morris on September 7, 1966. She and Bob owned and operated Club Diamondville for several years. They purchased the house she would reside in until she went into the nursing home.  They had one daughter, Roberta.

Katie never returned to Italy. She eventually lost touch with all members of her family and was never able to reconnect with them. At least two vestiges of her Italian heritage were never lost: her beautiful accent and her insistence on having a pink house. She said the pink reminded her of buildings in Naples.

Diamondville was Katie’s home for over six decades. Except for a short time spent living in Green River and her final years in the nursing home in Kemmerer, Katie lived in and loved the community of Diamondville. She enjoyed taking long walks around town with her dear Italian-American friend Maria Carollo. For many years, the duo, with bright-colored head scarves keeping their meticulously-styled hair in place, were a perennial sign of summer around town.

Katie was an employee of South Lincoln Medical Center for 32 years, working into her early eighties. During her time there, she was a reliable, dedicated, and hard-working member of the housekeeping and laundry services staff. She greatly enjoyed her friendships and associations at the hospital and was always grateful for and loyal to her employer.

Katie spent the final eight years of her life as a resident of South Lincoln Nursing Home where she affectionately called members of the staff “signora” and held their hands with her signature firm grip. She won their hearts with her kind and gentle manner, funny stories, and occasional streaks of naughty behavior.

A devout Roman Catholic, Katie was a long-time and faithful member of Saint Patrick’s Catholic Church in Kemmerer where she enjoyed lifelong friendships with other parishioners of the church. She loved the Lord Jesus Christ, believed in the power of prayers, and strove each day to live her religion.

Katie loved spending time with her family. Her children and grandchildren were her greatest treasure, and she dedicated her life to them.

She loved to cook. Her delicious soup, spaghetti, steak and dumplings, and lasagna will be missed, as will the tasty potica she baked each Christmas and Easter.  Katie will be remembered as a beautiful person, both physically and in the way she treated others. She was loyal, but not blindly so; independent, but knew when to ask for help; disciplined, but not inflexible; and loved to laugh, but was not afraid to cry. She had a great sense of humor, but never laughed at others’ expense. She endured many setbacks in her nine decades of life, but persevered with courage until the day the Lord took her to His heavenly home. She always loved angels and is now counted among them.

To order memorial trees or send flowers to the family in memory of Katherine Kiren Morris, please visit our flower store.