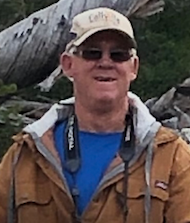 Kenneth Calvin Call was born on May 7th, 1958 in Council, Idaho to Calvin Clarence Call and Arlene Dee Burch Call. He was the first of four children with one brother and two sisters.

His parents moved their family frequently going from Idaho, to California, then Colorado, back to California, then Idaho, and finally ending up in Freedom, Wyoming. He was able to complete his High School years in Star Valley where he participated in football, basketball, wrestling, track, rodeo, and drama club as well as playing mascot. He loved to act and was given the lead in almost every play. He received a drama scholarship from Snow College but turned it down to go work in mining.

At the age of 21, he met his future bride Betty Hatfield at the Wyoming State Basketball Tournament. They were married on February 9th, 1980 in Cokeville, Wyoming. Shortly after, they welcomed their first son Joshua. They continued to grow their family with another son Thaddeus followed by two daughters Katrina and Shranda. The family spent their time in Wyoming, Idaho, and Nevada, eventually ending up back in Wyoming.

K.C. was the epitome of hard work and dedication to his family. He worked long hours doing hard labor in construction and mining working swing shifts most of his life. For eight months he worked long weeks then drove from Elko, Nevada to Cokeville to spend the weekend with his family, all to turn around and do it again. Even through all his hard work, he was never too tired or too busy for his kids. He took the time to teach each one to ride bikes, jump off giant tires, swim, camp, fish, and float the Salmon river.

In 2002, he moved to Kemmerer, Wyoming where he continued working at the coal mine. He worked his way up the ladder to machine operator, finally able to step away from the back-breaking labor.

K.C. loved fishing, camping, shooting guns, and spending as much time as possible outdoors. He spent many days on the lakes either fishing from the shore or out on his pontoon boat. The mountains were always calling his name and he loved to explore them with his trusty sidekick Sweet. He enjoyed traveling and covered almost the entire western United States; even highlighting every road he drove in his atlas so that he could take a new route the next time.

But his favorite thing to do was spend time with his kids, or more importantly, his 12 grandkids. He took great pride in his grandkids and made an effort to attend every blessing, birthday, sporting event, and school concert he could. He was the best papa, always willing to get down on the ground and wrestle his grandsons or hop up and dance with his granddaughters. His grandkids always knew they could tease him and play but they also knew he would follow it with a giant squeeze.

He had an infectious laugh and a giant heart. He never hesitated to help someone he loved and in turn he was loved by many. He lived an adventurous life and never ran out of stories to tell.

K.C. was preceded in death by his father, mother, and sister Brenda.

To order memorial trees or send flowers to the family in memory of Kenneth Calvin Call, please visit our flower store.