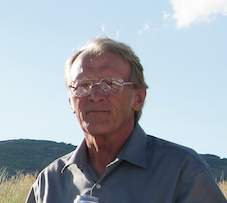 In Loving memory of Larry Kent Kominsky.  Larry was born in Kemmerer, Wyoming on May 24, 1950 to Donald J. and Nola J. (Horton) Kominsky.  Larry was a 1968 graduate of Kemmerer High School.  Growing up in Kemmerer he enjoyed sports and many outdoor activities.  In 1969, he started his working career with FMC Coke Plant as a laborer working up to accomplish being the youngest supervisor in the Coke Plant’s history.  After 32 years of service with the Coke Plant, Larry continued his working career with El Paso Natural Gas and Exxon Mobil until his retirement in 2013.

Larry had many hobbies and passions.  He played in the men’s softball league for 15 years.  He was well known for having a “cannon” arm, and was infamous for throwing a ball over the backstop from deep center field.  Larry also spent many years participating in the men’s bowling league.  He was a high average scorer and was one of a few Kemmerer kegglers to bowl over a 700 series and a high game of 279.  Larry traveled from coast to coast bowling in many state and national tournaments.  He greatly enjoyed golfing at the Kemmerer golf course amongst the company of many a duffer and a few hustlers, shooting an all par 36 on one occasion and not winning a single skin.  He was a faithful Wyoming Cowboy and New York Yankee fan.  Larry was also an avid reader, he read, read, read!

Larry enjoyed spending time outdoors with his family and friends.  He became a member of the Commissary Commandos with his father and brother.  He loved taking rides up country and enjoyed everything about the Kemmerer area.

A private gathering for family and close friends will be at the Ball Family Chapel on Monday, March 21, 2016 at 11:00 a.m. In Lieu of flowers donations to the Fossil Island Golf Course or a donation of your choice would be appreciated.

To order memorial trees or send flowers to the family in memory of Larry Kent Kominsky, please visit our flower store.