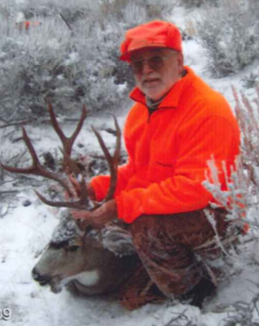 Larry Gene Rector, 78, Kemmerer, passed away unexpectedly at his home on Oct 8, 2019. Funeral services will be held 11 am Friday, Oct 18, at the South Lincoln Training and Event Center in Kemmerer, WY.

Larry was born on June 9, 1941, in Rushville, NE, the second son to Earnest and Ina (Fankhauser) Rector. After living in Mullen, NE until Larry finished the 3rd grade, the family moved to Edgemont, SD, where Larry met his future bride, Sandra Dawes. Larry graduated from Edgemont High in 1959 and he and Sandy were married on Aug 7, 1960 and made their home in Vermillion, SD.  Larry earned his Bachelor of Science degree from the University of South Dakota in 1963. They welcomed their first child, Teri, in July of that year and the family moved to Brookings, SD where Larry earned his Masters degree from South Dakota State University in 1964. Larry was an outstanding college athlete, earning national honors in track and field.

Two more children, Tim and Tamara, joined the family in 1966 and 1970 respectively. Larry taught high school in Tracy, CA, Hay Springs, NE and Bayard, NE, before moving to Kemmerer, WY in 1984 where he taught math and coached for 20 years before retiring in 2004. Throughout Larry’s coaching career, his teams in track and field and cross country won numerous state championships. Larry enjoyed the Kemmerer schools and community greatly. In his retirement, he enjoyed hunting and fishing as well as attending school events and travelling to see his grandchildren’s various activities.

Larry was preceded in death by his parents, Earnest and Ina Rector, and sister, Ardyce (Stan) Schumacher.

To order memorial trees or send flowers to the family in memory of Larry Gene Rector, please visit our flower store.