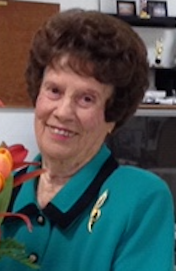 Maria Annunziata Balzan Carollo passed away at the age of 95 on September 15, 2020 at the South Lincoln Nursing Home in Kemmerer, Wyoming.

Maria was born on May 2, 1925 to Giuseppe and Appolonia Balzan in Calvene, Italy, where she grew up with her two older brothers, Antonio and Bruno. After finishing school in the fifth grade, Maria took up several jobs to support her family, including working as an assistant shopkeeper and as a nanny for a local family with two children.

When she was in her twenties, Maria began exchanging letters with Alfonso Carollo, the son of a family from the neighboring town of Mortisa who had emigrated to the United States in 1922. In May of 1952, Alfonso returned to Italy where they were married. Together, the couple traveled to Diamondville, Wyoming where Alfonso had been working as a coal miner. They lived in a small house on Susie Avenue in Diamondville, Wyoming, which she would later have painted pink, her favorite color.

On August 15, 1962 Maria became an American citizen. She was extremely proud of her citizenship and would display numerous American flags in and around her home. Maria was also a devout member of Saint Patrick’s Catholic Church, for many years belonging to the Catholic Church Women.

Maria worked as a housekeeper for many years at the Lazy-U Motel, as well as using her skills as a seamstress to do mending and alterations. She was a strong, dedicated, and hard worker throughout her life. Well into her nineties she would spend summers tending to the beautiful flowers she planted around her house.

She loved to make homemade pasta, gnocchi, and sweets, and would often donate these to charity. Her pizzelle cookies and potica were special favorites of anyone who knew her. She also loved to crochet afghans and baby blankets for anyone who wanted to give them as a gift. It made her happy to know that the babies would be kept warm.

For many years, Maria enjoyed gathering with the ladies of Diamondville for cake and ice cream to celebrate birthdays. She was so grateful to everyone who visited her throughout her life, especially her friends who would join her for afternoon tea at her home and later in her room at the nursing home.

Services will be held on October 24, 2020 at St. Patrick’s Catholic Church in Diamondville.  The Rosary will be at 10:30 followed by the funeral mass at 11:00. COVID precautions will be taken in accordance with church policies.

To order memorial trees or send flowers to the family in memory of Maria Carollo, please visit our flower store.