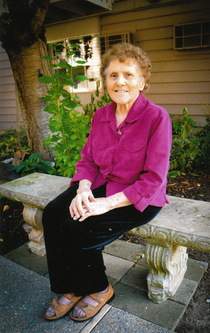 Martha D. Bertot, age 89, passed away on February 5, 2014 at Pacifica House in Coeur D'Alene, Idaho.  She was born on November 20, 1924 in Cumberland, Wyoming, the daughter of Daniel and Rose (Furlanich) Shickich.

She attended school and graduated from Kemmerer High School.  She then moved to San Franscisco, CA; during WWII, and worked for the DoD as a secretary.  She returned to Kemmerer and married John Bertot in January of 1945 while he was on leave.  She held various jobs including working for the Forest Service until after the Korean War.

Martha was a business woman in the Kemmerer community for several years owning and operating numerous businesses, including, Martha's Flower Shop for over twenty years;  The Busy Bee Cafe; and Martha's Sweat Shop; and after leaving Kemmerer for a short while owned the Java Hut.  She was also director of the Kemmerer Senior Citizens Center for numerous years in the 80's.

Martha was preceded in death by her parents, Dan and Rose Shickich, a brother, John, her husband, John Bertot, and a daughter, Caroline.  She is survived by a son, Douglas Bertot, of Coeur D'Alene, Idaho, a grandson, Jeffrey of Salt Lake CIty, UT.; and granddaughter, Nicole Bertot Thomas of Leander, TX.; and great granddaughters, Natasha and Tatiana.

Memorial services and inurnment  to celebrate her life will be conducted in Kemmerer at Ball Family Chapel on June 24, 2014 at 2:00 P.M.  Inurnment will follow services at the South Lincoln Cemetery, Kemmerer, WY.   At her request, her remains have been cremated under the direction of English Funeral Chapel in Coeur D'Alene, Idaho.
To order memorial trees or send flowers to the family in memory of Martha D. Bertot, please visit our flower store.