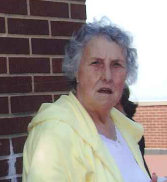 Mary Katherine “Kathy” Morrison, passed away at Evanston Regional Hospital in Evanston, WY.  on February, 17, 2017 at the age of 78.  She was born on February 25, 1938 in Pageland, South Carolina, the daughter of Spofford and Bessie Corlee (Tucker) James.

She married Lee Morrison on June 26, 1972 in Roxboro, North Carolina.  She loved to entertain guests in her home, and especially enjoyed spending time cooking, traveling, working on puzzles, and being able to spend time with her grandchildren.

Visitation will be held at Ball Family Chapel on Friday, February 24, 2017 from 6:00 P.M. Until 8:00 P.M., and one hour prior to funeral services on Saturday.  Funeral services will be conducted at 2:00 P.M., at Ball Family Chapel in Kemmerer, WY. On Saturday, February 25, 2017.  Rev. Sara Shields will officiate.   Interment will follow services at the South Lincoln Cemetery, Kemmerer, WY.

To order memorial trees or send flowers to the family in memory of Mary Katherine "Kathy" Morrison, please visit our flower store.