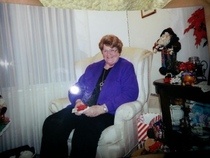 Maude Esther Smith Marston Call, died on February 7, 2014 at South Lincoln Nursing Center, Kemmerer, WY. at the age of 89.  She was born, October 20, 1924, in Georgetown, ID.; the youngest of 9 children (3 died in infancy).  She was raised on the family ranch in Georgetown, ID.  Her mother died when she was 4 yrs. of age so her older brothers and sisters and close relatives became her "heroes" and teachers.  Her dad later remarried Clara hoff and she brought a new brother (Fred) and sister (Adele) to the family.  Later they had a son, Wade.

Maude graduated from Georgetown High School where she was active in many things and received many honors.  She was the Student Body President.  After graduation, she moved to Ogden, Utah for a short time and then to Pasco, Washington to help her siser Nina with her first baby and worked for the Army Engineer Supply Depot.  While in Pasco, she met a Mormon Missionary, Elder Charles Frederick Martson.  He later became her husband on October 10, 1945.  They were married in the Salt Lake Temple.  They lived in Pocatello, ID. where they were active in Church and Civic organizations.  They enjoyed 4 1/2 years of sublime happiness!  Charles was killed in an automobile accident April 20, 1950, just 5 months before their long awaited child Charles Frederick Marston, Jr. was born.

Maude continued her employment at Garrett Freight Lines Main Office in Pocatello until after Charles Jr. was born and then moved to Ogden, Utah and began a 13 year career with the U.S. Air Force at Hill Air Force Base.  Charles Jr. was her salvation.  He brought so much joy, happiness, and purpose to her life.  She married Cyril Call on December 14, 1963 and moved to Kemmerer, Wyoming.  She really enjoyed turning the responsibility reins over to a loving and kind husband.  Charles Jr. was devoted to him and always called him "Dad".   He treated Cyril with love and respect.  Charles Jr. died July 10, 2001 and Cyril died June 10, 2004.  Maude always said she was blessed with the love of three great men during her life.  Maude maintained that God sustained her with "His Earth Angels".  She will be eternally grateful for the wonderful friends and neighbors who have helped lighten her sorrow and brought happiness into her life.

She was active in The Church of Jesus Christ of Latter Day Saints.  Some of her callings included being a teacher of various classes in Sunday School, Young Womens Organization and Relief Society.  She was a counselor 4 different times in the Young Womens Organization, served as the Relief Society President and faithfully as a visiting teacher.  She loved the Church and the Lord.

She was preceded in death by both of her husbands, her parents, her son, 4 sisters (Vera Jensen, Verda James, Nina Hansen, and Alga Smith), and 5 brothers (Lloyd Smith, Thiel Smith, Wade Smith, Wilmer Smith, and Delmer Smith), and a step brother, Fred Hoff.  She is survived by a step son, Fred Call, a step sister, Adele Modula and 2 sister-in-laws, Joan Fulkerson and Veda Hoff and many nieces and nephews.

Maude loved life and people.  Her legacy is "She loved, She laughed, and She understood".

To order memorial trees or send flowers to the family in memory of Maude Esther Call, please visit our flower store.