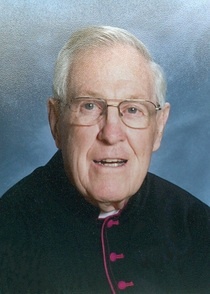 Monsignor (Father) Charles F. Taylor, passed away on February 14, 2014, peacefully in his sleep at South Lincoln Nursing Center, Kemmerer, WY. at the age of 87.
He was born on September 7, 1926 in Kemmerer, Wyoming, the son of Frank and Pauline Sammon Taylor, and grandson of one of Kemmerer's founders, John Sammon.
Father Taylor graduated from Kemmerer High School in 1944, served his country in the U.S. Navy during 1944-1946, attended Creighton University from 1946-48, and trained
at the St. Thomas Seminary in Denver, CO.  In 1953, Charles was ordained as a Catholic priest during a ceremony at St. Patrick's Catholic Church in Kemmerer, WY., less than a
block from his family's home.  A few years later he traveled to Rome, Italy, spending three years earning a doctorate in the canon law of the Church.  Father Taylor served the
Catholic Diocese of Cheyenne for over 50 years, at the Newman Center in Laramie, and at parishes and mission churches in or near Rock Springs, Jackson, Powell, Lander, Kemmerer,
and Buffalo, WY.  in 2003 he retired to his home in Kemmerer, from which he helped the Diocese on an on call basis for several additional years.

Monsignor Taylor is survived by his sister, Murray Taylor Huntington of Davis, Califorina, niece Peggy Popp and her children William Jr.; Ryan, and Bridgette Popp, all of
Diamondville, WY. and a nephew Charles Huntington of Shady Cove, OR.  He is preceded in death by his parents.

Vigil will be held on Wednesday, February 19, 2014 at St. Patrick's Catholic Church at 7:00 P.M. and Mass of Christian Burial will be celebrated on Thursday, February 20, 2014 at
10:00 A.M. at St. Patrcik's Catholic Church, with Bishop Paul D. Etienne, DD, STL; and the priests of the diocese as celebrants.  Interment with military honors will be held at the
South Lincoln Cemetery, Kemmerer, WY. following Mass.  Friends may call at the church one hour prior to the vigil, and the Mass for visitation.
To order memorial trees or send flowers to the family in memory of Monsignor Charles Taylor, please visit our flower store.