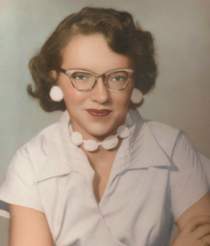 On December 11, 2015 a precious loving soul was called back to our Heavenly Father, for her work here on earth had come to a finish.  Retta Dean Smith Bosch was born in Salt Lake City, Utah, to Victoria Margaret Scott Smith, and Melvin Osborn Smith on August 17, 1931.  She was the 7th of 12 children and grew up in Salt Lake City, Utah, and graduated fro Granite High School.  She worked many jobs in her career, from Dugway Proving Grounds, to Saint Marks Hospital where she retired from.

She married Duane Wesley Francis Bosch in 1954, and was blessed with five children; three boys and two girls.  She loved to water ski, fish, sewing and putting together puzzles, the bigger the more complicated the better.  She enjoyed gardening and just being a Mom.

She enjoyed her LDS faith.  She was preceded in death by her husband, her parents, and her youngest daughter; two brothers, and six sisters.

She will be truly missed by both family and friends.

No services are planned.  Cremation has taken place and private inurnment will be held at the South Lincoln Cemetery, Kemmerer, WY.

To order memorial trees or send flowers to the family in memory of Retta Dean Bosch, please visit our flower store.