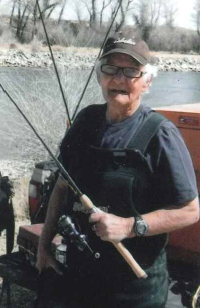 When Richard was eight months old, his parents divorced and the children were placed in a Catholic orphanage.  Richard went to foster care because he was under the age of two years old.  When he went into the orphanage, there was a catholic nun there who was pretty mean and he named her, “Meanie Mouse”.

Over time, the children went their seperate ways, and Richard found himself working on a ranch at the top of South Pass in Wyoming.  At the age of sixteen, he was able to get into the military and he was sent to Korea.  He was wounded three times, and just kept returning to battle.

He was a construction carpenter and traveled all over the country for many years from New Orleans, to Wisconsin, to Wyoming, Colorado, Montana, Pennsylvania, Utah, and anywhere else there was to do construction.  In time, all of the children were able to reconnect to each other.

Richard is survived by a sister, Maureen Weaver, a sister in law, Jan Brunker, and numerous nieces and nephews, a half brother, Chuck Kapke, many friends, and a very large construction family.  At the time of his death, he was doing what he enjoyed the most, working, well that was second to fishing.

If youd like to make a tribute to Pappy, take a kid fishing!

Graveside services and military honors will take place in the spring at the South Lincoln Cemetery Veterans Memorial.

To order memorial trees or send flowers to the family in memory of Richard John Brunker, please visit our flower store.