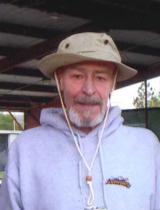 Richard loved to spend time in the outdoors camping.  He enjoyed spending time every year at the Oyster Ridge Music Festival in Kemmerer, and happended to pass away during the festival weekend this year.  He had a passion for watching and listening to the University of Wyoming Cowboys sporting events.  He had mentioned that he would want to have the Wyoming Cowboys as his honorary pallbearers so that they can “let him down” one more time.  Richard loved the 4th of July, gardening, and cooking.  He especially enjoyed spending time with his family, spending time surrounded by those he loved most, his children, and grandchildren, and great grandchildren.  He was also a big John Wayne western movie fan, and loved to watch the television series, MASH.

Richard is preceded in death by his parents, and one sister, Josephine Schwartz.

Rosary will be recited on Monday, August 3, 2015 at 10:00 A.M.; with memorial mass to follow the rosary, at St. Patrick's Catholic Church in Kemmerer, WY.   Inurnment will follow services at the South Lincoln Cemetery, Kemmerer, WY.  Military Honors will be held at the cemetery graveside services.  Father Tim Martinson will be the celebrant.

Memorial donations may be made to that of the donors choice.

To order memorial trees or send flowers to the family in memory of Richard Bartram Clarke, please visit our flower store.