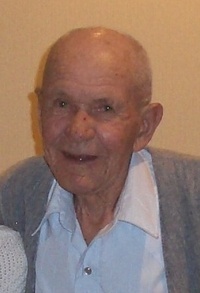 Robert B. Johnson passed away November 7, 2013 at his home in Diamondville. He was born one of eight children to Liisa Sophia and Herman Johnson on October 29, 1927. The family lived in Diamondville across the ditch from Columbari’s which were not only neighbors but also had a crossing on the Upper Hams Fork River which was named after them. He married Helen Margaret Sohlman, the love of his life on October 31, 1952 in Windsor, Canada. They were blessed with four children: Nancy Jo (Bob) Combs, Liisa Aileen, Robert Wayne (Michael Bond), and Kathryn Ann (Gene) Knepper.
Bob was an avid hunter and fisherman and loved the outdoors, “God’s Country,” as he called it. His children learned well from him. His family and friends could tell many, many stories about the numerous hunting and fishing escapades. Dad was a friend to all and would help anyone and anyone’s help was always appreciated, more so when you are up to your butt in mud and snow with a broken shovel and one chain.
He served in the Korean Conflict and was stationed in Germany and Austria.  He worked at the Ford Garage and later for twenty-two years at the FMC Coke Plant from which he retired.
Dad had a sense of humor that will be greatly missed. He had been around the block a time or two and was always willing to share and listen.  There were many ups and downs but none the less we always pulled through and in the end managed to put things in perspective. Our parents are loved and will be greatly missed and forever in our hearts.
Bob is survived by his three children, Sister Audrey Jones and grandchildren Bobbie Jo (Andy Ourada), Brandon (Amanda) Combs, Teresa Gregg, Stephen Gregg and Matt (Sarah) Jones.  He is also survived by his great grand-children, Paige Marie, Corbin, Braxton, Tyler, Amdon, Cheyenne, James, Matt, Whitney, Kaden, and two nephews Mike and Les and many, many close friends.
He is preceded in death by his father and mother, his wife, Helen on September 29, 2013,  his daughter Liisa, sisters Aile, Ione and Helen and brothers Frank, Ener and Urho.
The public is invited to attend a visitation at Ball Family Chapel on Tuesday, November 12, 2013 from 10:00-11:00 a.m.  Memorial services will be conducted on Wednesday, November 13, 2013 at 2:00 p.m. at Berta A Penny Memorial United Methodist Church in Kemmerer, with Pastor Emily Easton officiating.
Inurnment will follow services at the Diamondville Cemetery.
Memorial donations may be made to Wyoming Cares, the Kemmerer Senior Citizen Center or to the South Lincoln Nursing Center, Kemmerer, WY.
Arrangements have been entrusted to Ball Family Chapel of Kemmerer.
To order memorial trees or send flowers to the family in memory of Robert B. Johnson, please visit our flower store.