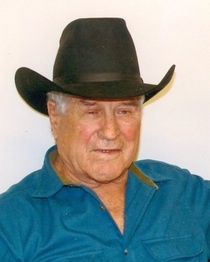 Ronald James Gunter, age 83, passed away at the South Lincoln Medical Center in Kemmerer, WY. On Thursday, February 26, 2015.  He was born on December 1, 1931, in Kemmerer, Wyoming, the son of Rudolph and Minnie (Mecca) Gunter.  He married Carolyn Stadmiller in June of 1951, and they later divorced.  To this union were born five children, Larry, Barbara, Patricia, James, and Monica.

Ron was an avid outdoorsman, enjoying hunting, horseback riding, and spending time on the rodeo circuit.  He loved to watch western movies.  He was an avid fan of The University of Wyoming Cowboy football and basketball teams.  He enjoyed spending time with his family, children, and grandchildren, and great grandchildren.  He was a kind hearted gentleman, and a true cowboy.

Ron is preceded in death by his parents, a brother, Teddy Gunter, a sister, Jeanette Gagliardi, a granddaughter, Amy Gunter, a great grandson, Chance Thoman, and a brother in law, Robert Nelson.

Visitation will be held on Sunday, March 1, 2015 from 6:00 P.M. Until 8:00 P.M. At Ball Family Chapel, Kemmerer, WY. Mass of Christian burial will be conducted on Monday, March 2, 2015 at 10:00 A.M. At St. Patrick’s Catholic Church in Kemmerer, WY. With Father David as the celebrant.  Rosary will also be recited at that time.  Interment will follow services at the South Lincoln Cemetery, Kemmerer, WY.

Memorial contributions may be made in Ronald’s memory to the South Lincoln Medical Center, or to St. Patrick’s Catholic Church in Kemmerer, WY.

Arrangements have been entrusted to Ball Family Chapel of Kemmerer, WY.
To order memorial trees or send flowers to the family in memory of Ronald James Gunter, please visit our flower store.