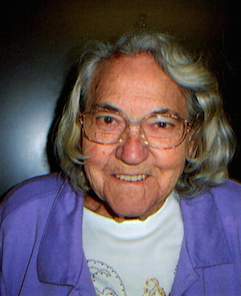 Our beloved Ruby was born in Sublette (Mining community #5) Wyoming, on September 3, 1927.  She was the daughter of Daniel Francisco Castano and Mary Jane (Ivie) Castano. Both parents died early leaving 13 orphans behind.  As a child, she lived with Norma Brunski cooking, cleaning and attending school on Frontier.  She graduated from Kemmerer High School in1946 and married Holger Johnson on July 5, 1947.  They were blessed with a son Edwin June 3, 1948.

In her golden years, Ruby was involved in volunteering and participating in activities at the LaBarge Senior Center.  She collected dolls, spoons, plates and cups/saucers that family and friends would gift her from their travels. As a very frugal lady she could stretch a penny and cleverly reinvent items. She was a member of The Church of Jesus Christ of Latter Day Saints, and served in many callings within the church.

Ruby is survived by two brothers Richard Castano and Dennis Castano (both residing in Washington), numerous nieces, nephews and their families.

Ruby was preceded in death by her parents, husband, son, seven sisters, and three brothers

To order memorial trees or send flowers to the family in memory of Ruby Naomi Johnson, please visit our flower store.