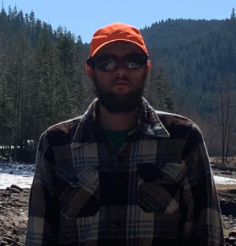 Residents of Opal are saddened by the untimely passing of one of our own; Schuyler D. McKnight.  Schuyler moved to Opal with his family from Springfield, Oregon in 2015 and began working for the town of Opal shortly thereafter.  His career began as summer help, but quickly became year round, permanent when leadership recognized his abilities, healthy curiosity and desire to learn.  During his tenure he obtained certification from the State of Wyoming as the Water and Wastewater Operator, in mosquito abatement and he got his Commercial Driver’s license.  He was also the town’s maintenance worker, groundskeeper and he operated the recycling center.  Schuyler cared greatly for his family, his town, his community and the earth.

More important than his employment credentials; however, was his genuine compassion for his friends and fellow residents.  Schuyler lived a full life.  He was an avid “rock hound” and had recently accepted a leadership position with the local gem and mineral club.  Schuyler’s group of friends was vast and varied.  He was respectful, sincere and above all, kind.  In our sadness, Schuyler would likely ask us all to set aside our ideological differences and be kind to one another.  What better way to remember and honor this unique young man.  He was our unforgettable friend.  He will be sorely missed.

He was preceded in death by his maternal grandmother, Georgia Meiss.

Schuyler passed away on August 12, 2019 at Lake Alice in a drowning accident.

Memorial services to celebrate his life will be conducted on Saturday, October 26, 2019 at 11:00 A.M., at the Opal Baptist Church in Opal, Wyoming.

Memorial donations may be made to the Lincoln County Search and Rescue in Schuyler’s name in care of Ball Family Chapel, P.O. Box 1004, Kemmerer, WY  83101.

To order memorial trees or send flowers to the family in memory of Schuyler D McKnight, please visit our flower store.