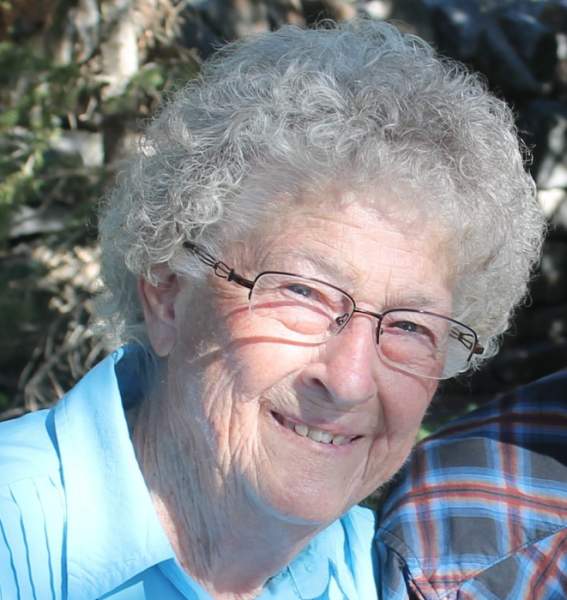 Shirley May Dolar completed her journey to heaven on the morning of August 4th 2017, passing away after a long illness.  Born on February 11th 1934 in Scranton, PA to Paul and Nellie Kolata, Shirley moved to Kemmerer as an infant and became a lifelong resident.  Shirley met the one and only love of her life, Glenn “Jiggs” Dolar in high school, they married on May 2nd 1954 and spent nearly every day of the next 63 years together.  She marked her commitment by never taking her wedding ring off her finger for any reason at all.

Life had some tragedies as Shirley’s mother died when she was 13; Jiggs was burned over most of his body in 1976 and miraculously survived; and she contracted a rare lung disease that lead to a health struggle that lasted more than two decades.  Still, she remained the rock of the family and found extreme happiness in life as a mother, grandma, and great-grandma.  She was always there in times of need and loved being involved in everyone’s sporting events and school activities.  Jiggs and Shirley traveled much of the country so they wouldn’t miss any of the grandchildren’s big moments in life. They loved going to the Oregon Coast in the summer and wintering with the desert flowers of Arizona.  Regardless of the trip, being with family was the reason for the destination.

As a life-long member of St Paul’s Lutheran Church, Shirley rarely missed a service or mid-week Bible Study and loved serving in whatever capacity was needed at the time.  She taught her family at an early age to follow her footsteps in faith, which was the greatest lesson she could pass on.

Shirley worked for the Postal Service and was Postmaster at Diamondville for 11 years. She loved serving the public and took pride in making sure all mail left Diamondville on time.

Shirley is preceded in death by her parents; her sister, Patty Hunzie; and brother, Paul “Buddy” Kolata.

Services will be held on Friday, August 11th at 2pm at St Paul’s Lutheran Church.  Burial at the Kemmerer cemetery will immediately follow the service.

To order memorial trees or send flowers to the family in memory of Shirley May Dolar, please visit our flower store.