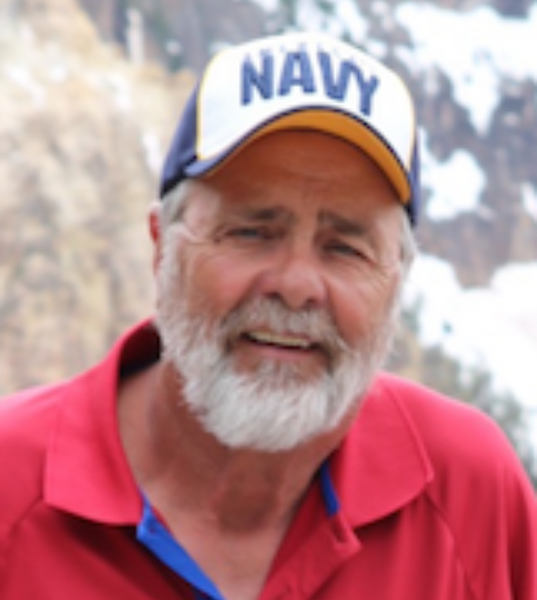 Ted K Walker, 69 passed away suddenly Wednesday September 29th, 2021 in Kemmerer, WY. He was a lifelong resident of Green River and then “The Mountains” after his retirement. He will be missed by all the people that he touched during his stay here on Earth.

Ted was born in Rock Springs, Wyoming on December 29th, 1951; the son of Kemsley & Mariam Walker.
He attended school in Green River and graduated in 1970 and then was shipped off to the Navy. He served during the Vietnam War on the USS Ajax.
His next adventure was marrying the love of his life Linda Hoopes and sweeping her off her feet and moved his new family to Green River. Ted and Linda raised two sons Steven and Ted Devin. Ted worked at FMC Corporation as an electrician and as a Maintenance Superintendent. He retired after working there for 34 years. He then transitioned to his favorite job retirement where he and Linda traveled the entire United States.
Ted was a larger-than-life personality and always said that he knew someone everywhere he went. He was the biggest jokester you have ever met, if he wasn’t giving you grief and laughing with you then you never met him. After he retired, he moved up to the cabin outside of Kemmerer, Wyoming that he and his wife built with their own two hands. He was very proud of the place and would always welcome anyone up there with a smile and a “What the hell you doin’ up here!” In the winter he would snowbird in Yuma, AZ where he would golf almost every day, and his tan would grow to legendary status. Ted was not a man to sit and watch he was a doer whether it was taking trips or fixing things around the house or making a mess with his tractor. He was always there with a helping hand for friends and strangers, although stranger was not a word in his vocabulary. When Ted reached Grandpa status, he loved every minute of it. He would tease them, and they would come back for more. Ted would never miss a kid’s sporting event even getting himself kicked out of a football game occasionally.
Survivors include his Wife of 46 years Linda Walker, and two son’s Steven and Jill Walker of Kemmerer, WY and Devin and Danielle Walker of Plumas Lake, CA, 5 grandchildren Hanna, Kemsley, Isla, Weston, & Hadley, one sister Maxine and Kennard Nelson and one brother Dick & Sally Walker, as well as several nieces and nephews.
He is preceded in death by his parents Kemsley and Mariam Walker, and a sister Phyllis Walker.
A viewing at Ball Family Chapel in Kemmerer, WY will be held at 6-8pm on October 4th. Another viewing will be held from 10-11 am on October 5th with a memorial service following at 11am. Graveside services will be in the Lyman Cemetery at 1pm and a celebration of life will be held at the Eagles Club in Kemmerer, WY following the graveside services at 3pm. Please, if you come to the Memorial bring your favorite Ted story to share. If you are not able to make it please email it to jwalker6308@yahoo.com.

To order memorial trees or send flowers to the family in memory of Ted K. Walker, please visit our flower store.