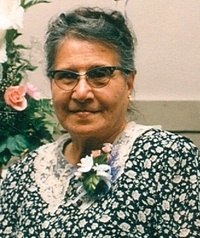 Telesfora (Rodriguez) Olguin, our  beloved mother and grandmother went to her heavenly home at the age of 99 years on September 13, 2013,
in Farmington, New Mexico.

She was born on November 23, 1913 to Jose Maria Rodriguez and Emilia Gurule Rodriguez in Rio Lucio, New Mexico.  Her mother passed away
when Telesfora was 11 years old and she and her siblings were raised by their paternal grandparents (Jacebo and Eutima Rodriguez).

She married John (Juan Francisco) Olguin on February 9, 1935, in Penasco, New Mexico.  The couple and their four children moved to Wyoming
in 1941 and eventually made their home in Diamondville, WY.  They had eight children.  Our father was killed in a mine accident at the Blind Bull
Mine on the Greys River on July 9, 1952.  Our mother devoted herself raising her family.

Telesfora and Policrinio Olguin married and stayed in Diamondville until their move to Farmington, New Mexico.  Policrino passed away on
June 10, 1998.  Mom stayed in Farmington till 1999, returning to Wyoming and later spent the last years of her life in Farmington.

She was an excellent cook, loved her flowers, her saints and reminiscing about her early life and friends and neighbors in New Mexico
and Wyoming, and stayed close to her spanish heritage in Rio Lucio, New Mexico.  She chose to be buried in her former town to be close
to her family.

Inurnment will follow the services at the South Lincoln Cemetery, Kemmerer, Wyoming

To order memorial trees or send flowers to the family in memory of Telesfora Olguin, please visit our flower store.