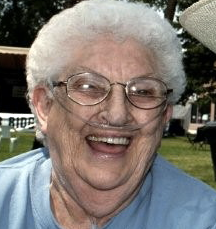 Wanda Vasey was born on September 27, 1928 on the Spur Ranch near

LaBarge, Wyoming to James “Doc” Sims and Belle Mahaffey Sims.  She attended grade schools in LaBarge, Wasatch Academy in Mt.Pleasant, Utah and graduated from Kemmerer High School in 1946.  She moved to Denver, Colorado where she went to a trade school and following graduation, she worked for Western Union.  November 11, 1948 she married Leslie C. Vasey in Rock Springs, Wyoming.  They made their home at the Western Oil Camp where they raised their three sons.  Wanda drove school bus for 27 years, worked part time at the post office, the library, LaBarge Merc, and was a waitress at the Log Hut Cafe and Names Hill Cafe.

She was a member of the American Legion Auxiliary, the Lincoln County Historical Society, Decker Oil Bowling team and Rancherette Home Ec Club.  She enjoyed hunting arrowheads in the desert, hiking and fishing in the mountains, Logice puzzles, Hershey Bars, reading a good mystery book and taking care of her cats.

In her later years, Wanda moved to Diamondville, WY. Where she was active in volunteer work at the museum, as an aide to Mrs. Rogers at the school and library where she was a board member for seven years.

She was preceded in death by her parents, her husband, a sister, Vicki and three brothers, James, Richard, and Robert, and a son, Les in 2011.

Cremation has taken place under the direction of Ball Family Chapel, of Kemmerer, WY.

To order memorial trees or send flowers to the family in memory of Wanda Mae Vasey, please visit our flower store.