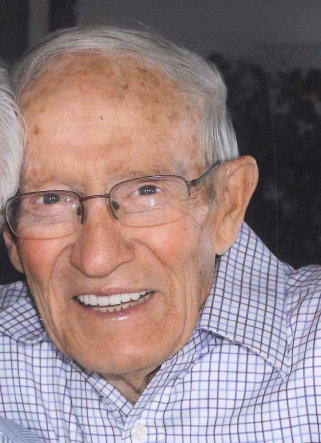 William Earl Mower passed away peacefully on December 10, 2016, at the age of 86, at the South Lincoln Medical Center.  Bill was born on August 16, 1930 in Spring Canyon, UT.  He was the sixth of nine children born to Clarence and Leona Mower.  Bill graduated high school from American Fork, UT and went on to attend a few semesters at BYU before enlisting in the Navy where he served for 4 years.  After returning home from the navy he married his sweetheart Shirley Berg, who just so happened to be his childhood best friend’s sister.  They lived in American Fork for a few years where they started their family.  Bill got transferred with the Power Company to Nucla Colorado.  It was there that their youngest son joined his 4 sisters..  After living in Nucla for a few years Bill got transferred again to Kemmerer, WY which is where they called home.

Bill was a great outdoorsman and enjoyed spending time at the family cabin, hunting, fishing, snowmobiling, cutting down trees, arrowhead hunting and making sourdough pancakes.  He took great pride in sheering sheep and was one of the best.  He made countless friends over his career of sheep shearing.  Another thing that Bill took pride in was his work ethic.  Over the course of his time at the plant he believed that sick days were there to accumulate not use.  Bill loved his wife, family, grandchildren, great grandchildren and great-great grandchildren.  He loved spending time with each and every one of them but the one he talked about and adored the most was his sweetheart Squirl (which was what he called Shirley)

Bill could always make you happy.  You knew when you saw him that you were going to get a handshake and a hug, and that you would leave with a smile on your face.  He was a wonderful example to everyone that knew him.

Funeral services will be held Saturday December 16 at the LDS Stake Center in Kemmerer.  There will be a viewing from 11-1 and funeral services to start directly after.  Interment will follow at the South Lincoln Cemetery in Kemmerer, WY.  Full Military Honors will take place.

To order memorial trees or send flowers to the family in memory of William Earl Mower, please visit our flower store.