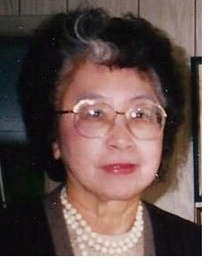 Yoshiye “Riki” Tanaka passed away peacefully at the South Lincoln Nursing Center with family and friends at her side on March 20, the first day of Spring 2015, after a lifetime guided by a favorite scripture passage:  “Do everything in love.”  (1 Corinthians 15:14)  Born on a Leap Day, February 29, 1928, Yoshiye relished her 87 years although she was as young at heart as her 21 Leap birthdays.  She was a beloved aunt, friend and teacher with a kind, generous and inspiring spirit.  She overcame many obstacles to achieve her dreams, doing so with faith, intelligence, grace and good humor.

Yoshiye’s parents, Chojiro “Charley” & Rikiko Tanaka, were immigrants from Japan and settled in Kemmerer in 1919, raising their five children during the Depression and opening the Tanaka Tailor Shop on the Triangle in 1930, with the family residence behind the storefront.  A 1947 graduate and valedictorian of Kemmerer High School, Yoshiye received a four-year honor scholarship to the University of Wyoming where she established herself as an excellent student her freshman year.  But her college dreams were interrupted by her parents’ illnesses, with Yoshiye returning to Kemmerer to care for her parents, keep the family business going, and contribute to the family’s financial well-being.

Throughout her life, Yoshiye not only cared for her parents and siblings, she cared for her community while also battling her own health challenges, including breast cancer twice, always making the best of whatever detours she encountered.  She dedicated 40 years to a career with the Lincoln County Department of Public Assistance & Social Services helping families in need.  Yoshiye closed the Tailor Shop in January 1976 after her mother’s passing and became the proud owner of her home on Beech Avenue – a personal milestone – the site of many community meetings and parties.  Yoshiye was active in the Kemmerer Chamber of Commerce and received appointments to the Lincoln County Board of Economic Development and to the Advisory Councils to the Lincoln-Uinta County Association of Governments and the South Lincoln Mental Health Board.  In 1987, Yoshiye received the Chamber’s Distinguished Community Service Award and was also named Outstanding Business Woman of the Year, following in her mother’s footsteps.

Upon retirement from Lincoln County, Yoshiye began a new career in education as a substitute teacher in the Kemmerer schools.  She loved teaching and loved the kids.  She also volunteered as a tutor to homebound children and those with difficulty reading.  The students – from elementary through high school – embraced her quick humor and passion for learning and teaching.  The School District awarded Yoshiye with a “Golden Apple” in recognition of her dedication to the children.  She also tutored adults seeking to become U.S. citizens, just as she had her own parents.

In her sixties, Yoshiye wasn’t just a teacher, she was once again an enthusiastic college student picking up where she left off in 1948.  On May 13, 1995, in cap and gown, 67-year old Yoshiye graduated from the University of Wyoming with a Bachelor’s Degree in History.  During the commencement ceremony, UW President Roark highlighted Yoshiye’s life story, stating “[a]fter nearly a half century her dream of a UW degree is coming true . . . because of her steadfast commitment.  Her perseverance and her selfless devotion to her family are remarkable.  She is an inspiration to all.”  Yoshiye also received special recognition from Wyoming Governor Jim Geringer for her achievement.  After helping her younger sister and her nieces and nephew with their educations, the spotlight was deservedly on Yoshiye, their cherished Auntie.  Her college writing assignments and Historical Society presentations provided relatives with a rich and treasured family history.

Yoshiye’s tenacious optimism in the face of numerous challenges was rooted in her unwavering faith and attitude of gratitude.  Yoshiye led by example in the Berta Penney Memorial United Methodist Church and Rocky Mountain Conference of the UMC for decades.  Putting her faith into action, Yoshiye welcomed all as her neighbors, taught generations of Sunday School children, guided adult Bible studies, chaired committees, organized fellowship and fundraising events, and worshipped wholeheartedly – a true disciple.

Yoshiye also warmed hearts with her friendship and generous hospitality organizing everything from bowling leagues and Class of ’47 reunions to Birthday Club dinners and New Year’s Day potlucks with her famous wontons, continuing the annual tradition started by Kemmerer’s Japanese American families decades before.  Yoshiye was still coordinating parties and looking out for her fellow residents at the South Lincoln Nursing Center where she spent her final years.  For her family, though far away, Yoshiye never forgot a birthday or special event, celebrated every visit with a feast, and kept all in her daily prayers.  Even with her last breaths, she whispered appreciative compliments and “I love you” to her many visitors.

Although challenged with vision troubles for many years, Yoshiye was blessed with the gift of seeing the spiritual best in everyone.  Through easy conversation, a wink and cheerful encouragement, she nurtured the positive potential in all who knew her – from her youngest pupils to fellow seniors and staff at the Nursing Center.  As the saying goes:  “Nothing is so strong as gentleness, nothing so gentle as real strength.”  That was Yoshiye.

Humble to the end, yet always the teacher, the advice that Yoshiye wished to be passed on to family and friends comes from another favorite scripture, Philippians 4:8-9:  “Finally, brothers and sisters, whatever is true, whatever is noble, whatever is right, whatever is pure, whatever is lovely, whatever is admirable – if anything is excellent or praiseworthy – think about such things.  Whatever you have learned or received from me, or seen in me – put it into practice.  And the God of peace will be with you.”

After nearly a century, Yoshiye was the last surviving member of the Tanaka family in Kemmerer.  She was preceded in death by her parents Charles & Rikiko Tanaka, brothers Chuck and Hish Tanaka, and sisters Trudy Tanaka and Chiyo Tanaka Okamoto.  All contributed to the town they loved and called home, but none more than lifelong resident Yoshiye.  She is survived by nephew David (Amy) Okamoto and their children Lauren and Jeffrey, niece Jeri Okamoto (Dan) Floyd and their children Rachel and Jacquelyn, niece Helen Kaye Tanaka, and many dear friends.

A graveside service will be held on Wednesday, March 25, at 2:00 p.m. at the South Lincoln Cemetery in Kemmerer, with light refreshments following at the Berta Penney Memorial United Methodist Church.  Friends may also pay respects at the Ball Family Chapel from 6:00 to 8:00 pm on Tuesday, March 24.

A celebration of the life of Yoshiye Tanaka with family and friends will be held in Kemmerer in July 2015.  Her family looks forward to establishing scholarships in her name to honor her commitment to education.

Memorial donations may be made in Yoshiye’s honor to the Berta Penney Memorial United Methodist Church, P.O. Box 704, Kemmerer, WY 83101.


In our end is our beginning;
In our time, infinity;
In our doubt there is believing;
In our life, eternity.
In our death, a resurrection;
At the last, a victory,
Unrevealed until its season,
Something God alone can see.

From one of Yoshiye’s favorites – The Hymn of Promise
To order memorial trees or send flowers to the family in memory of Yoshiye "Riki" Tanaka, please visit our flower store.